Brewarrina (locally known as "Bre") is a town in North West New South Wales, Australia on the banks of the Barwon River in Brewarrina Shire. The name Brewarrina is derived from 'burru waranha', a Wayilwan name for a species of Acacia, Cassia tree, "Acacia clumps", "a native standing" or "place where wild gooseberry grows". It is 96 km (60 mi) east of Bourke and west of Walgett on the Kamilaroi Highway, and 787 km (489 mi) from Sydney. The population of Brewarrina in 2011 was 1,254. Other towns and villages in the Brewarrina district include; Goodooga, Gongolgon, Weilmoringle and Angledool. 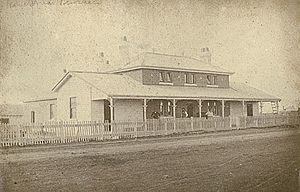 The town is located amid the traditional lands of the Ngemba, Muruwari and Yualwarri peoples. The area has a long Indigenous Australian history and was once the meetings grounds for over 5,000 people.

The first settlers arrived in the district around 1839-40. The first people to own land where the town now stands were the Lawson brothers, who had two holdings - one called "Walcha" and another called "Moona" The town was first known as "Walcha Hut" but this later changed to "Brewarrina".

In 1859 a stockman at Walcha Hut on the Lawson run was warned by Aborigines to release one of their women. He refused, and both he and the woman were killed. In retaliation, the settlers shot a large number of Aboriginal men, women and children in what became known as the Hospital Creek Massacre. A memorial was erected by the local Aboriginal Land Council near the site of the massacre.

In 1859 a riverboat called Gemini, skippered by William Randell, reached the town. This opened the possibility of developing the town as a port, and by the early 1860s Brewarrina was recognised as the furthest navigable point on the Darling River. Brewarrina became a port for shipping wool to Adelaide via the Darling and Murray rivers. The town was formally surveyed and laid out in 1861 and proclaimed on 28 April 1863.

The paddle steamer Wandering Jew 66 tonnes; 22 × 4.4 × 1.5 m. Built in 1866. Registered at Sydney. On 15 December 1914, Wandering Jew was lost due to a fire on Barwon River, Brewarrina. "The Wandering Jew represents an earlier maritime era and provides a direct link to the riverine heritage of Brewarrina. Its colourful history and repeated damage by fire is evocative of the dramas associated with riverboat travel".

The 1870s were something of a boom time for Brewarrina. The courthouse was built in 1871. The Telegraph reached town in 1873. The Mechanics Institute formed in 1873. The following year two hotels, two stores and the Commercial Bank all opened, and in 1875 The Parish of Brewarrina was formed and public school was opened. All this development was largely due to Cobb and Co, which had a number of coach services passing through the town. There was a service from Byrock, one from Dubbo via Warren and, in 1874, a direct service from Brewarrina to Enngonia, north of Bourke. The number of people moving through the town at this time would have been considerable and would have given rise to the increase in stores and hotels.

The Barwon Bridge opened in 1888, the previous method of crossing the Barwon River was by punt and pontoon. The impetus for Brewarrina bridge, was to capture the New South Wales wool trade from the river paddle steamers and direct it away from Melbourne and Adelaide to Sydney. It is a rare bridge because it, and the lift bridge at North Bourke, are the only surviving examples of the first series of lift bridges in New South Wales. The bridge has been assessed as being of state significance and is listed on the NSW State Heritage Register.

In 1901 the Brewarrina railway line opened to Brewarrina from Byrock, on the Nyngan to Bourke line. The Brewarrina Line closed in 1974, and the wood-framed Brewarrina Station burned to the ground in 1980. The local telephone exchange was established in 1913. The town was surveyed in 1920. Brewarrina was used as a location for the Australian silent film Moora Neya, or The Message of the Spear (1911).

In August 1987 Brewarrina erupted into a riot that was triggered by the death in police custody of Lloyd James Boney. On 10 August 1987 the Prime Minister Bob Hawke announced a Royal Commission into indigenous deaths in custody. 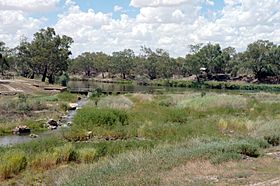 Brewarrina's most significant feature is its Aboriginal fish traps. Known in the local Aboriginal language as Baiame's Ngunnhu. It is believed that Ngemba, Wonkamurra, Wailwan and Gomolaroi people have shared and maintained the traps for thousands of years. The age of the fish traps is currently unknown, they may be the oldest human construction in the world. Locals claim that the traps are at least 40,000 years old and thus the oldest surviving human-made structure in the world.

Consisting of river stones arranged to form small channels, the traps direct fish into small areas from which they are readily plucked. The traps form a complex net of linked weirs and ponds along 500 m (547 yd) of the river. They operate at varying water heights and can be altered to suit seasonal changes. People use their expert knowledge of fish species and the environment to maximise their catch. Brewarrina Ngemba Billabong has been declared a World Conservation Union (IUCN) Category V and VI protected area. It was declared an Indigenous Protected Area in November 2010. The ready availability of fish made Brewarrina one of the great intertribal meeting places of pre-European eastern Australia.

The townspeople of Brewarrina play a variety of sports. The town has a local Rugby Union club and team, the Brewarrina Brumbies. Rugby League is a very popular sport in Brewarrina, with the town sporting a number of different teams. Local players Alby Carr, Ron Gibbs, Les Biles, Isaac Gordon and his cousin Ashley Gordon played first grade in the National Rugby League. Netball is played weekly, with over 12 teams playing in the local competition. The Brewarrina Golf Club is renowned throughout the western region as one of the best 'oiled' green golf courses. Other major sports in Brewarrina include bowls, shooting, tennis and swimming. The river is also used for swimming and water skiing in the summer months.

The Brewarrina Circus Skills Training Project is a program, which trains local kids skills in circus acts and gives them the opportunity to travel across the country to places like Adelaide and Melbourne. The Brewarrina Youth Circus was a partnership with the Brewarrina Council and Brewarrina Central School with objectives to increase school attendance. This program has also given particular kids the chance to travel overseas, with one girl travelling to South Africa to perform in the art of circus skills.

Brewarrina is host to one of the most famous Rodeos in the far west of New South Wales, the "Barwon River Rodeo", which is usually held on the New South Wales Easter long weekend.

Brewarrina is also well known for its annual "Festival of the Fisheries", which celebrates Brewarrina's Aboriginal and European History. The event has sometimes not been held in recent years.

Other annual events include the local agricultural show, and the Brewarrina Races.

Especially noteworthy is the Brewarrina "Surfboat Classic", the only one of its type, in which canoes are raced up the Barwon River. This event usually attracts hundreds of spectators from neighbouring communities and even from the east of the state.

All content from Kiddle encyclopedia articles (including the article images and facts) can be freely used under Attribution-ShareAlike license, unless stated otherwise. Cite this article:
Brewarrina, New South Wales Facts for Kids. Kiddle Encyclopedia.