Coonalpyn is a small town in South Australia 163 km (101 mi) southeast of Adelaide on the Dukes Highway (A8). Coonalpyn is situated in the Coorong District Council region and is in the State electorate of MacKillop and the Federal electorate of Barker. 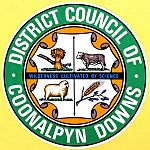 This town's name is derived from the Aboriginal word Coonalpyn, meaning Barren Woman. Coonalpyn Downs was chosen by John Barton Hack to name the property and the railway station within this property.

In 1927, the Congregational Church in Coonalpyn erected its church building, and is now the Coonalpyn Uniting Church.

Electricity came to Coonalpyn through ETSA in 1962 and a water pipeline was constructed between Tailem Bend and Keith in 1968.

Lutheran History of the Area

All content from Kiddle encyclopedia articles (including the article images and facts) can be freely used under Attribution-ShareAlike license, unless stated otherwise. Cite this article:
Coonalpyn, South Australia Facts for Kids. Kiddle Encyclopedia.