Tailem Bend has junctions on both the Adelaide-Melbourne railway and highways linking Adelaide to Melbourne. South of the town is the junction between the Princes and Dukes Highways

The Tailem Bend Ferry, a cable ferry, operates across the Murray River to Jervois. 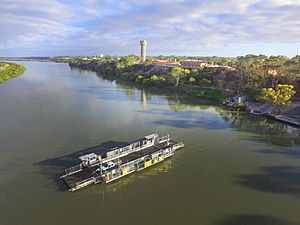 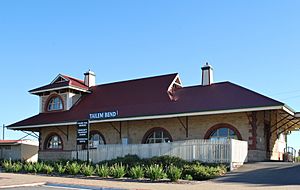 There are large grain storage silos and bunkers, where branch lines into the Murray Mallee join the main line. The last two branches were the Pinnaroo railway line and the Loxton railway line via Karoonda. The Loxton line was originally one of five branch lines from the Barmera railway line and was the last to remain in service. It was the only branch to be converted to standard gauge (along with the separate Pinnaroo line) when the main line was converted from broad gauge, however they remained as light rail and ballast with low speed limits. They were only used for collection of bulk grain, as the speed limits are too low to be practical for transport of time-sensitive freight. Both closed in July 2015. The Pinnaroo line continues as the original broad gauge into Victoria to Ouyen where it joins the Mildura to Melbourne line. As the South Australian line closed, the Victorian government was upgrading its end of the line for regional freight.

Tailem Bend station was once a significant junction station for passenger trains on the Mallee lines, and home to a locomotive depot.

Tailem Bend is on the Princes Highway 20 km from the end of the South Eastern Freeway to Adelaide. From Tailem Bend, there is a choice of the Dukes Highway as the direct route to Melbourne, the Princes Highway along the Coorong and coast towards Melbourne, or the Mallee Highway east towards Sydney. There is also a road connecting to the Karoonda Highway leading to Loxton and the Riverland. Tailem Bend is a common stopping point for truck drivers travelling to and/or from Adelaide, as there are no fuel or food outlets with truck facilities on the South Eastern Freeway.

Notable people from or who have lived in Tailem Bend include:

All content from Kiddle encyclopedia articles (including the article images and facts) can be freely used under Attribution-ShareAlike license, unless stated otherwise. Cite this article:
Tailem Bend, South Australia Facts for Kids. Kiddle Encyclopedia.