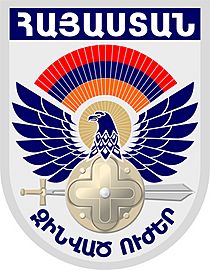 The Emblem of the Armed Forces of the Republic of Armenia

The Armed Forces of the Republic of Armenia is the Army, Air Defense, and Border Guard. Some parts were formed out of the former Soviet forces in the Armenian SSR.

The Commander-in-Chief of the military is the President of Armenia, currently Robert Kocharyan. The Ministry of Defense is in charge of political leadership. It is currently headed by Mikael Harutyunyan. Military command is in the hands of the General Staff, headed by the Chief of Staff, who is Lieutenant-General Seyran Ohanyan. Armenia established a Ministry of Defense on 28 January 1992. The Border guards purpose is to patrol Armenia's borders with Georgia and Azerbaijan, while Russian troops continue to watch its borders with Iran and Turkey.

All content from Kiddle encyclopedia articles (including the article images and facts) can be freely used under Attribution-ShareAlike license, unless stated otherwise. Cite this article:
Armed Forces of Armenia Facts for Kids. Kiddle Encyclopedia.