El Centro is a city in and county seat of Imperial County, California, the largest city in the Imperial Valley, east anchor of the Southern California Border Region, and the core urban area and principal city of the El Centro metropolitan area which encompasses all of Imperial County. El Centro is also the largest American city to lie entirely below sea level (−42 feet or −13 meters). The city, located in the far southeastern corner of California, is near the major Southern California city of San Diego and the Mexican city of Mexicali.

Founded in 1906, W. F. Holt and C.A. Barker purchased the land on which El Centro was eventually built for about $40 per acre ($100 per hectare) and invested $100,000 in improvements. As one historian of valley life put it, "in only five months El Centro went from a barley field to a city...". It is home to retail, transportation, wholesale, and agricultural industries. There are also two international border crossings nearby for commercial and noncommercial vehicles. The city's population was 42,598 at the 2010 census, up from 37,835 in 2000.

Spanish explorer Melchor Díaz was one of the first Europeans to visit the area around El Centro and Imperial Valley in 1540. The explorer Juan Bautista de Anza also explored the area in 1776 (an elementary school in El Centro now bears his name). Years later, after the Mexican-American War, the northern half of the valley was annexed by the U.S., while the southern half remained under Mexican rule. Small scale settlement in natural aquifer areas occurred in the early 19th century (the present-day site of Mexicali), but most permanent settlement (Anglo Americans on the U.S. side, Mexicans on the other side) was after 1900.

Originally part of San Diego County, the Imperial Valley was settled by farmers once water from the Colorado River was diverted via canals to irrigate the desert valley floor.

In 1906, the land on which El Centro was later built was purchased by W. F. Holt and C.A. Barker.

By 1907 Imperial County was incorporated into California and by then much of the valley was successfully irrigated.

Before the town began, the railroad had established a station and named the place Cabarker. The name honored C.A. Barker, a friend of the landowner. The first post office in El Centro opened in 1905.

Agriculture has been an important industry within El Centro since the 1940s, because of its strategic location near rail lines and Highways 80 and 99 – more than 35 growers and shippers still operate in El Centro. However, by the early 1980s the two largest employment sectors in El Centro were government and wholesale/retail trade, reflecting El Centro's emerging role as a regional administrative and commercial center.

Imperial Valley Mall opened on the southeast side of the city in 2005.

The nearby Algodones Dunes, the largest dune field in the US, draws thousands of visitors each year, mainly for off-road driving. The Salton Sea lies 30 miles (48 km) north of El Centro, but water sport enthusiasts head to the Colorado River, 50 miles (80 km) to the east near Yuma, Arizona. The El Centro Naval Air Facility 10 miles (16 km) to the west is home to the annual Blue Angels flight maneuvering event. Stark Field is home of a minor league baseball team El Centro Imperials of the Arizona Summer League. Mexico (the border city of Mexicali, Baja California) is 10 miles (16 km) away, which offers big city amenities like museums, a zoo and a sports/convention center. 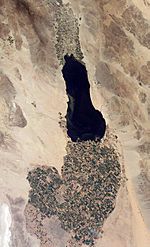 The Imperial Valley, as seen from the Space Shuttle. North is to the upper right. The Salton Sea is at the center. The US-Mexican border is a diagonal in the lower left.

The agriculture industry's demand for water is supplied by canals diverting water from the nearby Colorado River. The Salton Sea was created after a 1905 flood from the Colorado River.

In this region, the geology is dominated by the transition of the tectonic plate boundary from rift to fault. The southernmost strands of the San Andreas Fault connect the northern-most extensions of the East Pacific Rise. Consequently, the region is subject to earthquakes, and the crust is being stretched, resulting in a sinking of the terrain over time.

El Centro has a desert climate and is the southernmost desert city below sea level in the continental United States. El Centro has over 350 days of sunshine and under 3 inches (76 mm) of rain annually. Winter temperatures are in the mid 70s to mid 80s with over-night lows in the low 50s to mid 40s. During summer days, the dry, desert heat can push temperatures well into the 100s, while the nights stay in the low 80s to mid 70s. Snow is almost totally unknown in the town, except for a very strong winter storm that covered the entire valley with 4 inches snow on December 12, 1934 and a very brief fall of sleet mixed with hail during a shower in December 1967. On average there are about 6 days that dip into the mid to lower 30's. 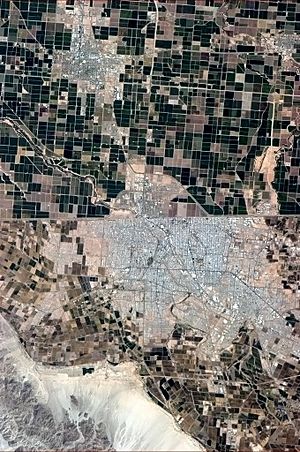 El Centro, seen from the International Space Station, lies just north of Calexico and Mexicali and the Mexico-US border

While the majority of the residents in this community are Hispanic, there is a diverse population with a wide array of interests. In the winter residents race on nearby sand dunes using four wheel drive buggies. During the summer residents spend time indoors instead of outside. Spanish is a dominant language among residents and over the radio. Many area residents live in both the United States and Mexico and go across the border frequently.

There were 11,439 households out of which 47.4% had children under the age of 18 living with them, 53.9% were married couples living together, 18.7% had a female householder with no husband present, and 22.1% were non-families. Of all households, 18.8% were made up of individuals and 7.3% had someone living alone who was 65 years of age or older. The average household size was 3.2 and the average family size was 3.7.

In 2009 the Latinos in El Centro mainly consisted of dual citizens and permanent resident card (green card) holders. Illegal immigrants tended to go through Imperial County instead of staying in Imperial County.

There are three major highways that serve El Centro. Interstate 8 connects San Diego to the west and Yuma, Arizona to the east. State Route 86 and State Route 111 parallel each other as they go north to Brawley before running along the west and east shores of the Salton Sea, respectively, on their way to the Coachella Valley area. Going south from El Centro, State Route 86 terminates at State Route 111, which runs to Calexico and Mexicali, Mexico.

Imperial Valley Transit is the primary provider of mass transportation in the Imperial Valley. Formed in 1989 with just 3 buses and serving just 3000 people per month, the agency now currently serves more than 73,000 riders within the area per month.

All content from Kiddle encyclopedia articles (including the article images and facts) can be freely used under Attribution-ShareAlike license, unless stated otherwise. Cite this article:
El Centro, California Facts for Kids. Kiddle Encyclopedia.