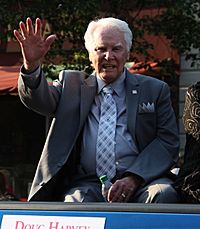 Harvey umpired five World Series and six All-Star Games. His career total of 4,673 games ranked third in major league history at the time of his retirement. He was the ninth umpire to be inducted into the Baseball Hall of Fame.

On January 13, 2018, Harvey died at the age of 87. He was under hospice care in Visalia, California. He had been suffering from esophageal cancer.

All content from Kiddle encyclopedia articles (including the article images and facts) can be freely used under Attribution-ShareAlike license, unless stated otherwise. Cite this article:
Doug Harvey (umpire) Facts for Kids. Kiddle Encyclopedia.