Bombay Beach is a census-designated place (CDP) in Imperial County, California, United States. It is located on the Salton Sea, 4 miles (6.4 km) west-southwest of Frink and is the lowest community in the United States, located 223 feet (68 m) below sea level. The population was 295 at the 2010 census, down from 366 in 2000. The population estimate for 2020 was 415. It is part of the El Centro, California, metropolitan statistical area.

Bombay Beach was once a popular getaway for beachgoers until the 1980s, when the draining and increasing salinity of the Salton Sea destroyed the lake's ecosystem and drove businesses and private landowners out of the area, rendering Bombay Beach a ghost town. Despite this, by 2018, a number of people had moved into the area, and the town's many abandoned structures and features from its past have drawn visitors back in. An article in The Guardian stated that it was "enjoying a rebirth of sorts with an influx of artists, intellectuals and hipsters who have turned it into a bohemian playground." The Bombay Beach Biennale, an annual art festival, is held here. 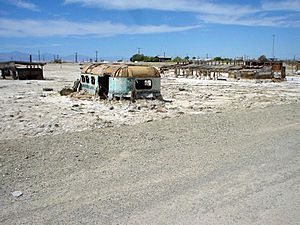 According to the United States Census Bureau, the CDP has a total area of 0.9 square miles (2.3 km2), all land.

Most residents use golf carts to get around, since the nearest gas station is 20 miles (32 km) away in Niland.

The ruins of Bombay Beach attract many photographers and visitors. The town, as well as others on the shores of the Salton Sea, is one of the lowest settlements in altitude in North America. Besides the local American Legion, the Ski Inn is the only drinking establishment or bar in the town.

Florian Ayala Fauna of the music duo uncertain grew up in Bombay Beach, California. Fauna credits the place as an inspiration to her music. In an interview with Buffalo, New York alternative newspaper The Public's Cory Perla, Fauna described it as "a very kind of post-apocalyptic-looking town."

American football safety Cedric Thompson for the Minnesota Vikings of the National Football League (NFL) also grew up in Bombay Beach, California. He became one of the primary subjects of the 2011 documentary Bombay Beach directed by Alma Har'el. He later cited boredom in Bombay Beach as his inspiration for pro football.

All content from Kiddle encyclopedia articles (including the article images and facts) can be freely used under Attribution-ShareAlike license, unless stated otherwise. Cite this article:
Bombay Beach, California Facts for Kids. Kiddle Encyclopedia.