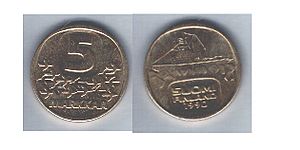 The Finnish markka, also known as the Suomen markka, or simply markka, was the currency in Finland before Finland started to use Euro. Markka's abbreviation was mk and internationally FIM. There were 100 pennies, (penni, p), to each markka. There were also coupons.

All content from Kiddle encyclopedia articles (including the article images and facts) can be freely used under Attribution-ShareAlike license, unless stated otherwise. Cite this article:
Finnish markka Facts for Kids. Kiddle Encyclopedia.