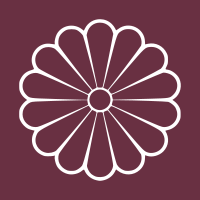 Seal of the party.

The Liberal Democratic Party (Japanese:自由民主党 Jiyū-Minshutō; or just Jiminto) is one of the main political parties in Japan. It has ruled Japan for most of the time since World War II. The party is conservative. The current leader is Yoshihide Suga.

The party wants a close relationship with the United States, and wants fast export-based economic growth. They also want to undergo more privatization. The party is social conservative, and is against the legalization of same-sex marriage. Jiminto is also a Japanese nationalist political party.

All content from Kiddle encyclopedia articles (including the article images and facts) can be freely used under Attribution-ShareAlike license, unless stated otherwise. Cite this article:
Liberal Democratic Party (Japan) Facts for Kids. Kiddle Encyclopedia.