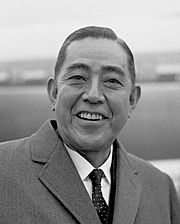 Eisaku Satō‏ (27 March 1901 – 3 June 1975) was a Japanese politician and the 39th Prime Minister of Japan. He was first elected in December 1964. He was the first Prime Minister to have been born in the 20th century. Satō shared the Nobel Peace Prize with Seán MacBride in 1974. He received the award for representing the Japanese people's will for peace, and for signing the nuclear weapons Non-Proliferation Treaty in 1970.

Satō‏ was born in Tabuse in Yamaguchi Prefecture. He suffered a stroke on May 23, 1975 and had fallen into a deep coma. He died on 3 June 1975 a Tokyo hospital.

All content from Kiddle encyclopedia articles (including the article images and facts) can be freely used under Attribution-ShareAlike license, unless stated otherwise. Cite this article:
Eisaku Satō Facts for Kids. Kiddle Encyclopedia.