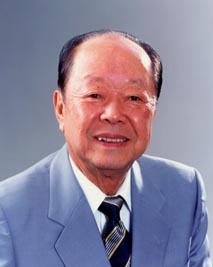 Miyazawa was born into a wealthy, politically active family in Fukuyama, Hiroshima, on 8 October 1919. His father was a member of the Diet and his grandfather a cabinet minister. He graduated from Tokyo Imperial University with a degree in law. In 1942, he joined the ministry of finance, avoiding military service during World War II.

In 1953, he was elected to the upper house of the Diet of Japan, where he stayed until moving to the lower house in 1967. Miyazawa held a number of prominent public positions. He became minister of finance under the government of Noboru Takeshita in July 1986. However, Miyazawa had to resign amid the Recruit scandal in 1988. 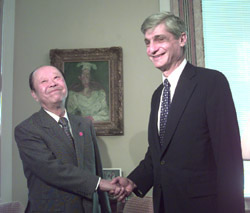 Miyazawa became Prime Minister on 5 November 1991 backed by his faction. Miyazawa gained brief fame in the United States when President George H. W. Bush vomited in his lap and fainted during a state dinner on 8 January 1992.

His government passed a law allowing Japan to send its forces overseas for peacekeeping missions as well as negotiating a trade agreement with the United States. It also introduced financial reforms to address the growing economic problem in Japan in the 1990s. 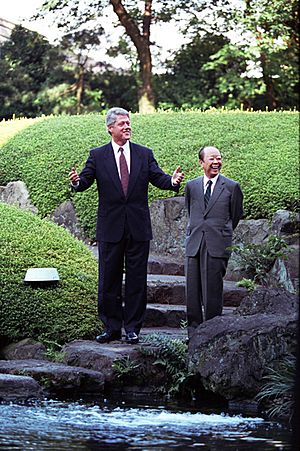 He served a total 14 terms in both upper and lower houses before retiring from politics in 2003. The reason for his retirement was that then prime minister Junichiro Koizumi set an age limit of 73 for LDP political candidates.

Miyazawa married while studying in the United States. He and his wife, Yoko, had two children. He published a book, entitled Secret Talks Between Tokyo and Washington, which was translated into English by Robert D. Eldridge in 2007. The book is about Miyazawa's views concerning the relationships between the US and Japan in terms of the political, economic, and security-related negotiations during the period of 1949 and 1954.

All content from Kiddle encyclopedia articles (including the article images and facts) can be freely used under Attribution-ShareAlike license, unless stated otherwise. Cite this article:
Kiichi Miyazawa Facts for Kids. Kiddle Encyclopedia.