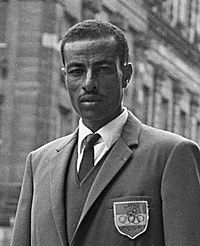 Abebe Bikila (7 August 1932 - 25 October 1973) was a double Olympic marathon champion from Ethiopia. He was the first black African Olympian to win a gold medal representing his own country. He is most famous for the gold medal he won in the 1960 Summer Olympics at Rome. He won the marathon while running barefoot. He won his second Gold medal in the 1964 Olympics in Tokyo. This made him the first man ever to win two Olympic marathons. He competed in the 1968 Summer Olympics. Bikila was injured in an automobile accident in 1970. It left him a paraplegic. He died at the age of forty-one on 23 October 1973. This was due to complications from his earlier accident. A stadium in Addis Ababa is named after him.

All content from Kiddle encyclopedia articles (including the article images and facts) can be freely used under Attribution-ShareAlike license, unless stated otherwise. Cite this article:
Abebe Bikila Facts for Kids. Kiddle Encyclopedia.