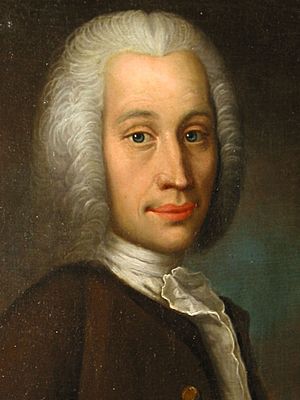 Anders Celsius (27 November 1701 – 25 April 1744) was a Swedish astronomer. Celsius was born in Uppsala in Sweden. He developed the Celsius temperature scale when he worked on meteorology (a science about weather conditions). It later became an international standard. One of his good friends Daniel Gabriel Fahrenheit invented the Fahrenheit scale for the thermometer.

All content from Kiddle encyclopedia articles (including the article images and facts) can be freely used under Attribution-ShareAlike license, unless stated otherwise. Cite this article:
Anders Celsius Facts for Kids. Kiddle Encyclopedia.