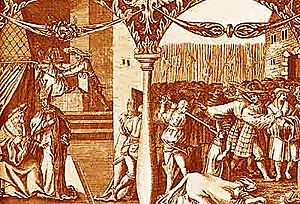 The Stockholm Bloodbath (Swedish: Stockholms blodbad) or Swedish Massacre (8–9 November 1520) was the mass killing of Swedish nobility by the Danish King Christian II (1451–1559). Denmark, Norway and Sweden were part of the Kalmar Union. There had been conflict in Sweden between those who supported the union, and those who wanted independence. In 1520 Christian II had invaded Sweden. The regent of Sweden, Sten Sture the Younger, was killed in battle. Christian II besieged Stockholm for four months. When the city gave in, he made himself king and killed 82 leading Swedes, including two bishops for heresy. The reason for heresy was the people of Stockholm had replaced Archbishop Gustav Trolle; this was said to be a crime against the Church. The killings made people so angry that he became known as "Christian the Tyrant". He was chased out of Sweden in 1523.

All content from Kiddle encyclopedia articles (including the article images and facts) can be freely used under Attribution-ShareAlike license, unless stated otherwise. Cite this article:
Stockholm Bloodbath Facts for Kids. Kiddle Encyclopedia.