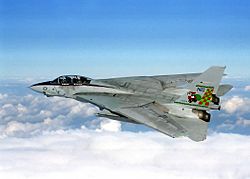 An air superiority fighter is a fighter airplane, which is designed for close combat in the air against enemy fighters. This type of aircraft is very expensive and it is produced in smaller numbers than other types of fighters.

Usage of the term

During World War II and the Korean War, fighters were divided by their roles: heavy fighter, interceptor, escort fighter, night fighter, and so on. By the mading of guided missiles in the 1950s, fighters were designed and made in two different kinds:

All content from Kiddle encyclopedia articles (including the article images and facts) can be freely used under Attribution-ShareAlike license, unless stated otherwise. Cite this article:
Air superiority fighter Facts for Kids. Kiddle Encyclopedia.