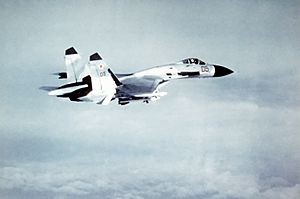 The Su-27 Flanker is a Soviet/Russian single-seat fighter aircraft made by Sukhoi. It first flew in 20 May 1977, and was introduced in 23 August 1990. It was first made by the Soviet Union as a fighter, but now it is in the Russian Air Force. It can hold up to 10 guided Air-to-Air medium-range R-27E or short-range R-73 or unguided Air-to-Ground missiles, unguided bombs and a GSh-301 30mm cannon with 150 bullets. It has two AL-31F turbofan engines, a multi-purpose onboard search and track radar, an optical infrared search and track station with a laser rangefinder linked to pilot's helmet-mounted target designator and with a wide-angle HUD.

All content from Kiddle encyclopedia articles (including the article images and facts) can be freely used under Attribution-ShareAlike license, unless stated otherwise. Cite this article:
Sukhoi Su-27 Facts for Kids. Kiddle Encyclopedia.