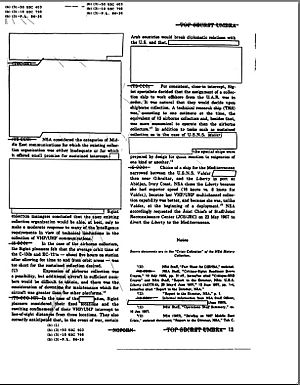 A typical classified document. Page 13 of a U.S. National Security Agency report on the USS Liberty incident, partially declassified and released to the public in July 2004. The original overall classification of the page, "top secret", and the Special Intelligence code word "umbra", are shown at top and bottom. The classification of individual paragraphs and reference titles is shown in parentheses—there are six different levels on this page alone. Notations with leader lines at top and bottom cite statutory authority for not declassifying certain sections.

Classified information is material that a government body claims is sensitive information that requires protection of confidentiality, integrity, or availability. Access is restricted by law or regulation to particular groups of people, and mishandling can incur criminal penalties.

With the passage of time much classified information becomes much less sensitive, and may be declassified and made public. Since the late twentieth century there has been freedom of information legislation in some countries.

However, classified information is frequently "leaked" to reporters by officials for political purposes. Several U.S. presidents have leaked sensitive information to get their point across to the public.

Although the classification systems vary from country to country, most have levels corresponding to the following British definitions (from the highest level to lowest). 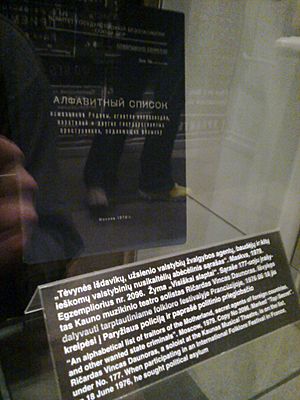 Top Secret is the highest level of classified information. Information is further compartmentalized so that specific access using a code word after top secret is a legal way to hide collective and important information. Such material would cause "exceptionally grave damage" to national security if made publicly available.

Secret material would cause "serious damage" to national security if it were publicly available.

Confidential material would cause damage or be prejudicial to national security if publicly available.

Restricted material would cause "undesirable effects" if publicly available.

Unclassified is technically not a classification level, but this is a feature of some classification schemes, used for government documents that do not merit a particular classification or which have been declassified. This is because the information is low-impact, and therefore does not require any special protection.

Clearance is a general classification, that comprises a variety of rules controlling the level of permission required to view some classified information, and how it must be stored, transmitted, and destroyed. Additionally, access is restricted on a "need to know" basis. Simply possessing a clearance does not automatically authorize the individual to view all material classified at that level or below that level. The individual must present a legitimate "need to know" in addition to the proper level of clearance.

Private corporations often require written confidentiality agreements and conduct background checks on candidates for sensitive positions. In the U.S. the Employee Polygraph Protection Act prohibits private employers from requiring lie detector tests, but there are a few exceptions. Policies dictating methods for marking and safeguarding company-sensitive information (e.g. "IBM Confidential") are common and some companies have more than one level. Such information is protected under trade secret laws.

The Traffic Light Protocol was developed by the Group of Eight countries to enable the sharing of sensitive information between government agencies and corporations. This protocol has now been accepted as a model for trusted information exchange by over 30 other countries.

All content from Kiddle encyclopedia articles (including the article images and facts) can be freely used under Attribution-ShareAlike license, unless stated otherwise. Cite this article:
Classified information Facts for Kids. Kiddle Encyclopedia.