Frank Dwight Baldwin (June 26, 1842 – April 22, 1923), a native of Constantine, Michigan, and born in Manchester, Michigan, is one of only 19 servicemen to receive the Medal of Honor twice. Baldwin received his first award for his actions during the Atlanta Campaign where he led his company in battle at Peachtree Creek and captured two commissioned officers in the American Civil War. He received his second for conspicuous bravery in 1874 during the Indian Wars. Baldwin holds the distinction of being a recipient of the Medal of Honor in different conflicts. He also fought in the Philippines during the Spanish–American War and rose to the rank of major general before retiring.

Baldwin served in the Civil War in the 19th Michigan Infantry, initially as a first lieutenant, fighting in all his regiment's battles from 1862 to 1865. In 1864, then-Captain Baldwin participated in General William Tecumseh Sherman's famous March to the Sea, and on July 20 of that year distinguished himself at the Battle of Peachtree Creek, earning his first Medal of Honor.

After the war, he became a student at Hillsdale College, but upon the postbellum reorganization of the Regular Army, he joined the 19th United States Regular Infantry as a second lieutenant in 1866. He was eventually assigned to the 5th U.S. Infantry, with whom he fought in the various frontier conflicts with the Indians. He served with distinction under General Nelson A. Miles as chief of scouts during campaigns against Sitting Bull and Crazy Horse.

On November 8, 1874, while commanding a scout company on escort duty, he led a surprise attack on the camp of Grey Beard, rescuing two young sisters whose parents and brothers had been killed by another Indian band. He was awarded his second Medal of Honor for this action against a larger force in a strong defensive position.

His actions in an attack on an Indian village on the Red River in Montana on December 18, 1876, earned him a brevet of captain, U.S. Regular Army (awarded on February 27, 1890).

Baldwin also served in the Philippines during the Spanish–American War. He was promoted to brigadier general, U.S. Regular Army on June 9, 1902, and he retired in 1906. In 1915, he was advanced to major general on the Army's retired list.

During World War I, Baldwin served as Adjutant General of the Colorado National Guard; appointed to the post in 1917, he served until retiring again in 1919.

On January 10, 1867, he married Alice Blackwood. They had one daughter, Juanita.

He died in Denver, Colorado on April 22, 1923, and is buried with his wife Alice in Arlington National Cemetery in Arlington, Virginia. 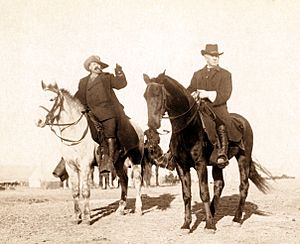 Baldwin (right) with Buffalo Bill in 1891

Rank and organization: Captain, Company D, 19th Michigan Infantry. Place and date: At Peachtree Creek, Georgia, July 20, 1864. Citation: "Led his company in a countercharge at Peach Tree Creek, Ga., 20 July 1864, under a galling fire ahead of his own men, and singly entered the enemy's line, capturing and bringing back 2 commissioned officers, fully armed, besides a guidon of a Georgia regiment." Date of issue: December 3, 1891.

Rank and organization: First Lieutenant, 5th U.S. Infantry. Place and date: At McClellan's Creek, Texas, November 8, 1874. Citation: "Rescued, with 2 companies, 2 white girls by a voluntary attack upon Indians whose superior numbers and strong position would have warranted delay for reinforcements, but which delay would have permitted the Indians to escape and kill their captives." Date of issue: November 27, 1894.

All content from Kiddle encyclopedia articles (including the article images and facts) can be freely used under Attribution-ShareAlike license, unless stated otherwise. Cite this article:
Frank Baldwin Facts for Kids. Kiddle Encyclopedia.