The Banking and Currency Committee was created on December 11, 1865. It was supposed to take over responsibilities of the Ways and Means Committee. It continued to use this name until 1968, when it became the current name. 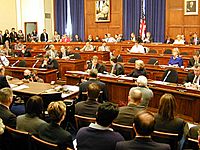 All content from Kiddle encyclopedia articles (including the article images and facts) can be freely used under Attribution-ShareAlike license, unless stated otherwise. Cite this article:
United States House Committee on Financial Services Facts for Kids. Kiddle Encyclopedia.