Kids Encyclopedia Facts
Not to be confused with Franklin County, Massachusetts. 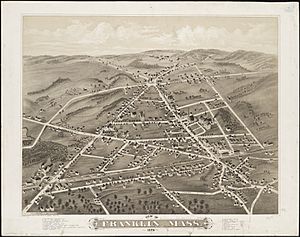 The Town of Franklin is a city in Norfolk County, Massachusetts, United States. Franklin is one of fourteen Massachusetts municipalities that have applied for, and been granted, city forms of government but wish to retain "The town of” in their official names. As of 2012, the city's population was 33,092. It is home to the country's first library, with its first books donated by Benjamin Franklin. It also contains the largest Catholic parish in the Boston Archdiocese, St. Mary's Catholic church, with some 15,000 members.

Franklin was first settled by Europeans in 1660 and officially incorporated during the American Revolution. The town was formed from the western part of the town of Wrentham on February 16, 1778; its designated name at incorporation was to be Exeter. However, the town's citizens chose to be called Franklin in honor of the statesman Benjamin Franklin, the first municipality in the U.S. to be so named.

It was hoped that Benjamin Franklin would donate a bell for a church steeple in the town, but donated 116 books instead, beginning a debate over who should be allowed access to these books. On November 20, 1790, it was decided that the volumes would be lent to the residents of Franklin for free via its library, which has been in operation since then. The Ray Memorial Library building was dedicated in 1904. In 1990, on the library's bicentennial, its staff published a booklet, "A History of America's First Public Library at Franklin Massachusetts, 1790 ~ 1990" to commemorate America's first public library and book collection.

The town is also home to the birthplace of America's father of public education, Horace Mann. The town is also home to what may have been the nation's oldest continuously operational one-room school house (Croydon, New Hampshire's school dates to 1780, but there is debate as to whether it is truly "one room"). The Red Brick School was started in 1792, its building constructed in 1833, and was operational until 2008. St. Mary's Catholic Church, located in central Franklin and built by Matthew Sullivan, is the largest Catholic parish in the Boston Archdiocese with some 15,000 members.

Most of Franklin lies within the Charles River watershed. Principal streams include Mine, Shepard's, Miller, Uncas, Dix and Miscoe Brooks. Much of the marshland along Mine Brook has been permanently protected by the Natural Valley Storage Project of the U.S. Army Corps of Engineers. The extreme southwest corner of Franklin is part of the Blackstone River watershed. The town has an impounded series of lakes known as the Franklin Reservoir, which is not used as a public drinking water supply. The lakes are now protected open space donated to the town by the late Ernest DelCarte. Beaver Pond also is a municipal recreation area and includes an artificial turf playing and recreation field, and playground. In the summer, it is a popular spot for swimming and fishing. The beach is also used for volleyball games. Significant public forests and parks include the Franklin State and the Franklin Town Forests.

Franklin's climate is variable. Winters are typically cold, with frequent Nor'easters and occasional blizzards. Snowfall ranges widely from season to season, although the average is about 50 inches (150 cm). In the recent past, there has been as little as 14 inches (360 mm) of snow (in the 1988–89 winter season) to 126 inches (in 1995–96). The amount decreases dramatically eastward towards Boston because of the influence of the Atlantic Ocean. Snowfall amounts can also decrease rapidly south of Franklin. Low temperatures below zero are not uncommon in winter, and the lowest recent temperatures have been 14 below in January 1994, 14 below in January 2011 and 16 below in February 2016. Average January high temperatures are in the low 30s. Average January low temperatures are in the upper teens. Snow depth can reach two feet or more during the winter season. The winter of 2010–11 was notable for snow depths of nearly 40 inches during January and February. Nearly 60 inches of snowfall was recorded in Franklin in January 2011 alone. The winter of 2014–15 saw a very cold February and March. Snow depths reached 45" by mid February. Snow cover lasted from late January until the first week of April. February 2015 was one of the coldest months on record. Snowfall for Franklin was 107.6" for the season. Spring temperatures can be mitigated by penetrating cold fronts originating from the Canadian Maritimes, known as "Backdoor Cold Fronts". Typically, high temperatures consistently above 70 degrees do not set in until late May. The last frost is usually in mid-May. Summers are generally comfortable, with periods of high humidity. Prolonged heat waves of three or more days with highs of 90 or above are uncommon but can occur. In July 2011 an unusually high temperature of 101 was reached. Average July high temperatures are in the low 80s and average lows are around 60. Severe summer weather is not as common as in areas to the west in Central Massachusetts. Fall is pleasant with the first frost usually around October 1, and the peak of the fall foliage season averages around October 12. Franklin can expect a "white" Christmas slightly under 50 percent of the time.

There were 10,866 households out of which 44.6% had children under the age of 18 living with them, 66.4% contained married couples living together, 22.4% were non-families, and 8.5% had a female householder with no husband present. 18.3% of all households were made up of individuals and 6.7% had someone living alone 65 years of age or older. The average household size was 2.80, the average family size 3.29.

The town is represented in the Massachusetts General Court by Representative Jeffrey Roy and Senators Richard Ross and Karen Spilka.

The Town of Franklin has its own theme song composed by town resident and music teacher James H. Barrett. Entitled "The City Known as the Town of Franklin", the song reflects the many unique characteristics of Franklin. The lyrics discuss the library, the one-room schoolhouse, and the birthplace of Horace Mann.

As noted, the Franklin Public Library is the first public library in America. It is a 1904 building with granite and marble staircases, frescoed walls in its reading room and still houses the original books donated by Benjamin Franklin. Across the street from the library is Dean College, with Gothic architecture and a historic gymnasium.

According to a survey of the center of Franklin done for the historical commission of the town, the Franklin Common Historic District includes 74 historically contributing buildings. There are a number of houses prior to 1780, including a saltbox, kept as close to original as possible, from 1710. There is a house that dates to 1780 and was moved to Union Street in 1840. The next oldest house was built in 1830. There are 32 buildings that were built before 1900. The former town hall on West Central Street was built in 1842.

At one end of Franklin's Historic District is the little Red Brick School. Its classroom, believed to be one of the oldest still functioning as a public school in the United States, celebrated its 175th birthday in 2008. The Franklin Town Common features a gazebo, and several dedications located around the common. The brick bandstand on the Town Common was dedicated in 1917 and contributed by the Hayward family. Concerts and a Fourth of July celebration are held on the Common each summer. The Feast of St Rocco, a four-day family festival, is held each year in mid-August, sponsored by St. Mary Roman Catholic parish.

Downtown there is a series of restaurants and bars. The street lines on Union Street used to be painted red, white, and green to reflect the extensive Italian heritage in the city. The Zeotrope was an old fashioned movie theater that was a trademark of Franklin lore until it was torn down.

At Beaver Pond, there is an AstroTurf playing and recreation field, and playground. In the summer, it is a popular spot for swimming and fishing. The beach is also used for volleyball games.

The town also contains remnants of its Industrial Revolution background. Until recently, abandoned mills existed along the railroad tracks. One old mill building was turned into residential condos and a nearby building consists of a variety of multiple-use commercial businesses, including the Franklin Mill Store. The Brookdale Mill on the other side of Franklin was converted into Incontro, an upscale restaurant. A fourth mill on Hayward street was converted for upscale shopping.

Franklin has easy access to major cities like Boston and Providence with its two exits along I-495 at Route 140 and King St. Commuter rail service from Boston's South Station is provided by the MBTA with the Forge Park/495 and Dean College stops on its Franklin Line.

Franklin, and the surrounding towns also have a bus system, that is part of the Greater Attleboro Taunton Regional Transit Authority (GATRA) bus authority. Its route features many stops around the town, including the Municipal Building, Senior Center, Franklin Public Library, and the Franklin Village Shopping center.

All content from Kiddle encyclopedia articles (including the article images and facts) can be freely used under Attribution-ShareAlike license, unless stated otherwise. Cite this article:
Franklin, Massachusetts Facts for Kids. Kiddle Encyclopedia.