Flag of Massachusetts facts for kids

The flag of the Commonwealth of Massachusetts is the flag of Massachusetts. It has been represented by official but limited-purpose flags since 1676, though until 1908 it had no state flag per se to represent its government. A variant of the white flag with blue seal was carried by each of the Massachusetts volunteer regiments during the Civil War alongside the National Colors. An exception were the two "Irish regiments" (the 9th and 28th Volunteers), each of which was permitted to carry an alternative green flag with a harp symbol.

The state currently has three official flags: a state flag, a "naval and maritime flag" (despite it no longer having its own navy), and a governor's flag. With Florida and Minnesota, it is one of only three state flags to prominently feature a Native American in its heraldry. In 2001, a survey conducted by the North American Vexillological Association (NAVA) placed Massachusetts's state flag 38th in design quality out of the 72 Canadian provincial, U.S. state and U.S. territorial flags ranked. 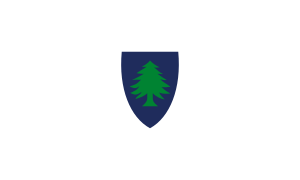 The flag of the Commonwealth of Massachusetts displays, on both sides, the state coat of arms centered on a white field. The shield depicts an Algonquian Native American with bow and arrow; the arrow is pointed downward, signifying peace. The arm itself is the Goliad symbol common in early Texas flags and signifying the philosophy that those represented would rather lose their right arm than live under tyranny. A white star with five points appears next to the figure's head, signifying Massachusetts' admission as the sixth U.S. state. A blue ribbon surrounds the shield, bearing the state motto Ense Petit Placidam, Sub Libertate Quietem ("By the Sword We Seek Peace, But Peace Only Under Liberty").

The state flag was officially adopted in 1901, but had been used unofficially since the American Revolutionary War as the ensign of the Massachusetts State Navy. In 1971, the earlier pine tree was replaced by the current design. 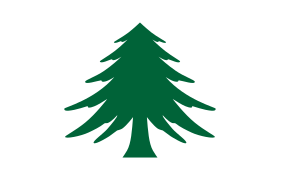 Naval and maritime flag of Massachusetts

In April 1776, the Massachusetts Navy adopted, as its flag (naval ensign), a white field charged with a green pine tree and the motto "An Appeal to Heaven." In 1971 the motto was removed, and the flag was designated "the naval and maritime flag of the Commonwealth".

Massachusetts is one of only two states with its own naval ensign — the other is Maine, which was part of Massachusetts until 1820.

All content from Kiddle encyclopedia articles (including the article images and facts) can be freely used under Attribution-ShareAlike license, unless stated otherwise. Cite this article:
Flag of Massachusetts Facts for Kids. Kiddle Encyclopedia.