New England has no official flag. However, there have been many historical or modern banners used to represent the region in its history. While there are some variations, common designs include a plain colored field (usually red) with a pine tree in the canton. The eastern white pine (Pinus strobus) is the most common and prominent symbol of New England and is featured on many of the region's flags.

Most New England flags were based on the red naval ensign or blue naval ensign of the Royal Navy, which featured the cross of St. George in the canton. The ensign was used at both the Jamestown and Plymouth colonies. Puritans in New England, led by Roger Williams, objected to the use of a Christian cross on their flag, and for a time flew a red flag with a plain white canton. The new flag first appeared in 1634 in Salem, but some considered it to be an act of rebellion against England. Opinion was sought from England, and the cross was retained on crown property, such as Castle Island. The crossless flags became popular in New England, and militia companies designed unique patterns on their flags. In 1665, the Royal Commissioners recommended that all ships and militia companies be ordered to fly "the true colours of England, by which they may be knowne to be his majesties legittmate subjects." Nevertheless, some crossless flags were still in use as late as 1680.

New Englanders continued to look for ways to represent their country, however. In 1684, the town of Newbury, Massachusetts, though retaining the Cross of St George, changed to a green flag. A pine tree was added to some flags during the reign of King James II, possibly inspired by the pine-tree shilling which was minted in Massachusetts. In 1707, a proclamation was issued that all merchant vessels fly the red ensign with the British Union Flag in the canton. To insure compliance, a woodcut was published in the Boston News-Letter on 26 January 1707 - the first illustration printed in an American newspaper.

Some controversy exists concerning which flag flew at the Battle of Bunker Hill in 1775, at the onset of the American Revolutionary War. An officer of the Royal Marines reported that no flags were used by the rebels. John Trumbull, known for his paintings of the war, used a red flag with a pine tree in his 1786 painting The Death of General Warren at the Battle of Bunker's Hill, June 17, 1775. However, he later painted another version of this painting for the family of the fallen general, which depicts a blue flag. (Another flag commonly used to represent the battle has a blue flag with a white canton, the canton quartered with cross of St. George (the symbol of England) with a tree in the first quarter of the canton.) Although possibly inspired by the Blue Ensign of the Royal Navy, the blue field is said to have been due to an error in a wood engraving, causing confusion among painters. (This could have been caused by incorrect "hatching", whereby parallel lines represent heraldic "tinctures" or colors: horizontal lines represent "blue," while vertical ones represent "red.") However, Benson John Lossing writes in Field Book of the Revolution that he interviewed the daughter of a Bunker Hill veteran who told her that he hoisted a blue flag on Breed's Hill prior to the battle. Regardless of its authenticity, the blue variation has become a symbol of the Battle of Bunker Hill, and as such Charlestown (the neighborhood encompassing Bunker and Breed's hills) and was featured on a 1968 US Postage Stamp. 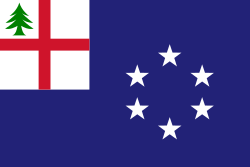 Flag adopted by the New England Governors' Conference in 1998

All content from Kiddle encyclopedia articles (including the article images and facts) can be freely used under Attribution-ShareAlike license, unless stated otherwise. Cite this article:
Flag of New England Facts for Kids. Kiddle Encyclopedia.