Flag of Maine facts for kids

The flag of the State of Maine features Maine's state coat of arms on a blue field. In the center of the shield, a moose rests under a tall pine tree. A farmer and seaman represent the traditional reliance on agriculture and the sea by the state. The North Star represents the state motto: dirigo ("I Lead").

The design commonly used omits the circular ring prescribed by Maine Law as a part of the Maine Arms and moves the "Sea and Forest Scene" from the outside of the shield to the inside of the shield. There are no known flags of the State that conform to the official description.

There are no official colors for the coat of arms, so variations in coloration can be seen in flags from different manufacturers. The blue field, however, is specified to be the same blue as in the flag of the United States. According to the official description, the flag should have a fringe of yellow silk and should have a blue and white silk cord attached at the spearhead. These embellishments are very rarely observed.

The law establishing the flag was enacted on February 23, 1909, and was modeled after flags used in the American Civil War:

§206. State flag. The flag to be known as the official flag of the State shall be of blue, of the same color as the blue field in the flag of the United States, and of the following dimensions and designs; to wit, the length or height of the staff to be 9 feet, including brass spearhead and ferrule; the fly of said flag to be 5 feet 6 inches [1.68 m], and to be 4 feet 4 inches [1.32 m] on the staff; in the center of the flag there shall be embroidered in silk on both sides of the flag the coat of arms of the State, in proportionate size; the edges to be trimmed with knotted fringe of yellow silk, 2 1⁄2 inches [64 mm] wide; a cord, with tassels, to be attached to the staff at the spearhead, to be 8 feet 6 inches [2.59 m] long and composed of white and blue silk strands. A flag made in accordance with the description given in this section shall be kept in the office of the Adjutant General as a model.”

Maine is one of 26 U.S. states that use a blue flag with the state arms or seal on them.

The North American Vexillological Association conducted a survey in 2001 that ranked Maine's current flag as one of the worst in design. Amongst the 72 U.S. state, U.S. territorial and Canadian provincial flags, Maine's flag ranked 60th (13th worst). NAVA criticized the unoriginality of "[state] seal on blue bed-sheet" design, which is currently used by over half of the flags of U.S. states. 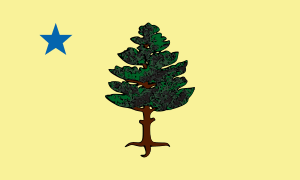 Digital reproduction of the 1901 flag

Originally, the state flag consisted of a green pine tree, symbol of New England in the center, with a blue "North Star", all on a buff-colored background. The image to the right contains a digital reproduction of the 1901 Flag. The reproduction uses the same pine tree used in the Merchant Marine Flag of Maine. Also, the size of the tree, set to 1/3 the fly and 2/3 the hoist, is guesswork.

The Maine legislature approved the current flag on February 23, 1909. 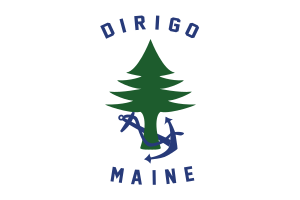 Merchant and Marine Flag of Maine

Maine is also one of only two states with a separate ensign, which is rarely seen (the other is Massachusetts). It features symbols from the current flag and the older one, with a white field and green pine tree. The green pine tree has the seaman's anchor, and the words "MAINE" and "DIRIGO" around it.

Flag of the 20th Maine 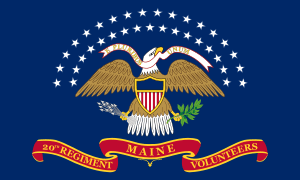 The flag used by the 20th Maine Volunteer Infantry Regiment during the American Civil War.

All content from Kiddle encyclopedia articles (including the article images and facts) can be freely used under Attribution-ShareAlike license, unless stated otherwise. Cite this article:
Flag of Maine Facts for Kids. Kiddle Encyclopedia.