Flag of Florida facts for kids

The flag of Florida consists of a red saltire on a white background, with the state seal superimposed on the center. The design was approved by popular referendum November 6, 1900. The flag's current design has been in use since May 21, 1985, after the state seal was graphically altered and officially sanctioned for use by state officials.

In 2001, a survey conducted by the North American Vexillological Association (NAVA) placed Florida's flag 34th in design quality out of the 72 Canadian provincial, U.S. state and U.S. territorial flags ranked. 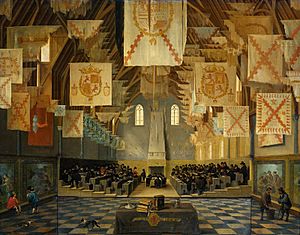 Burgundian saltires at the Assembly of the States General, 1651.

Spain was a dynastic union and federation of kingdoms when Juan Ponce de León claimed Florida on April 2, 1513. Several banners or standards were used during the first period of Spanish settlement and governance in Florida, such as the royal standard of the Crown of Castile in Pensacola and the Cross of Burgundy in St. Augustine. As with other Spanish territories, the Burgundian saltire was generally used in Florida to represent collective Spanish independence between 1513 and 1821.

Spain regained control of Florida in 1783. In 1785, King Charles III chose a new naval and battle flag for Spain, which was now a more centralized nation-state, and its territories. This flag, a tri-band of red-gold-red, was used along with the Burgundian saltire in the provinces of East and West Florida until 1821, when the Florida provinces joined the United States.

Between 1821 and 1861, Florida had no official flag. The Lone Star and Stripes, previously the Naval Ensign of Texas, was used as a provisional flag between 1861 and 1868, after Florida declared that it had seceded from the Union and declared itself a "sovereign and independent nation". This flag was also used when Floridian forces took control of U.S. forts and a navy yard in Pensacola. Col. William H. Chase was Commander of Floridian troops and the flag is also referred to as the Chase Flag. Later in the year the Florida Legislature passed a law authorizing Governor Perry to design an official flag. His design was the tri-band of the Confederacy but with the blue field extending all the way down and the new seal of Florida within the blue field.

Between 1868 and 1900, the flag of Florida was simply the state seal on a white background. In a discrepancy, however, a later version of the state seal depicts a steamboat with a white flag that includes a red saltire, similar to Florida's current flag. In the late 1890s, Governor Francis P. Fleming, a nationalist, advocated that St. Andrew's Cross be added so that it would not appear to be a white flag of truce hanging still on a flagpole. Floridians approved the addition of St. Andrew's Cross by popular referendum in 1900. The red saltire of the Cross of Burgundy represents the cross on which St. Andrew was crucified, and the standard can be frequently seen in Florida's historic settlements, such as St. Augustine, today.

Lastly, some historians see the addition of a red saltire as a commemoration of Florida's contributions to the Confederacy by Governor Fleming, who served in the 2nd Florida Regiment of the Confederate army. The addition was made during a period of nostalgia for the "Lost Cause" around the time of the flag's change. According to historian John M. Coski, the adoption of Florida's flag coincided with the rise of Jim Crow laws and segregation, as other former Confederate slave states, such as Mississippi and Alabama, also adopted new state flags based off Confederate designs around the same time when those states instituted Jim Crow segregation laws themselves:

The flag changes in Mississippi, Alabama, and Florida coincided with the passage of formal Jim Crow segregation laws throughout the South. Four years before Mississippi incorporated a Confederate battle flag into its state flag, its constitutional convention passed pioneering provisions to 'reform' politics by effectively disenfranchising most African Americans.

All content from Kiddle encyclopedia articles (including the article images and facts) can be freely used under Attribution-ShareAlike license, unless stated otherwise. Cite this article:
Flag of Florida Facts for Kids. Kiddle Encyclopedia.