Flag of Minnesota facts for kids

The Minnesotan flag flying underneath the American flag.

The first state flag of Minnesota was adopted in 1893; at that time a prototype flag was commissioned from the local embroiderer Pauline Gerhardin Fjelde, which won a gold medal at the Chicago World's Fair.

The 1893 flag, designed by the Amelia Hyde Center of Minneapolis, was white on one side and light blue on the other. In the center was the state seal wreathed with white moccasin flowers, on a blue field. A red ribbon in the seal bore a motto, L'Étoile du Nord (French for "The Star of the North"). The years 1819 (establishment of Fort Snelling), 1858 (statehood), and 1893 (adoption of the flag) appeared in gold around the state seal. "Minnesota" was written under the state seal in gold and 19 gold stars arranged in clusters to form the points of a star, representing the fact that Minnesota was the 19th state to be admitted after the original 13 states.

The flag was redesigned in 1957, eliminating the different-colored sides in favor of a royal blue field on both sides which represented the promise given in America that gave people the right to choose leaders, instead of leadership descending from royal blood. The blue sits underneath the people which represents how the people's power is greater than any one man. This made the flag less expensive to manufacture and also more durable in high winds. This opportunity was used to correct an error of the flowers used on the seal; instead of a Pink and White Lady's Slipper, the 1893 flag showed a variant that was not native to the state.

The law creating the 1957 state flag is located in Chapter 1 of the Official State Statutes. The chapter covers state symbols, sovereignty and other general issues. The location of the flag in the statutes is Section 1.141. The statute also requires the Secretary of State to keep a photograph of the official state flag and samples so they can be used by the public to make copies. In Minnesota, desecration of the state flag is a misdemeanor offense under State Statute 609.40. 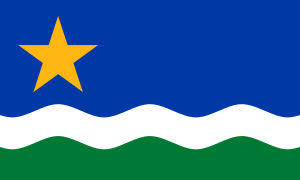 Since 1989, several efforts have been made to redesign the Minnesota flag — most notably the North Star Flag campaign. The North American Vexillological Association (NAVA), in its 2001 survey of US States, US Territories and Canadian provincial flags rated the current Minnesota flag 67th out of 72 flags evaluated.

All content from Kiddle encyclopedia articles (including the article images and facts) can be freely used under Attribution-ShareAlike license, unless stated otherwise. Cite this article:
Flag of Minnesota Facts for Kids. Kiddle Encyclopedia.