The Federal Reserve Bank of Boston, commonly known as the Boston Fed, is responsible for the First District of the Federal Reserve, which covers New England: Maine, Massachusetts, New Hampshire, Rhode Island, Vermont and all of Connecticut except Fairfield County. It has been headquartered since 1977 in the distinctive 614-foot (187 m) tall, 32-story Federal Reserve Bank Building at 600 Atlantic Avenue, Boston. Designed by architecture firm Hugh Stubbins & Associates, the tower portion of the building is suspended between two towers on either side. From 1922 to 1977, the bank's headquarters were located at 250 Franklin Street, currently occupied by the Langham Hotel Boston.

The code of the Bank is A1, meaning that dollar bills from this Bank will have the letter A on them. Its current president is Eric S. Rosengren, who replaced Cathy E. Minehan in July 2007. The Boston Fed describes its mission as promoting "growth and financial stability in New England and the nation". The Boston Fed also includes the New England Public Policy Center.

The following people serve on the board of directors as of August 2017[update]. Terms expire on December 31 of their final year on the board. 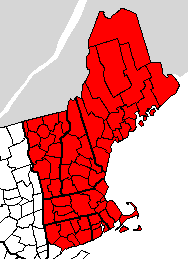 Map of the First District

All content from Kiddle encyclopedia articles (including the article images and facts) can be freely used under Attribution-ShareAlike license, unless stated otherwise. Cite this article:
Federal Reserve Bank of Boston Facts for Kids. Kiddle Encyclopedia.