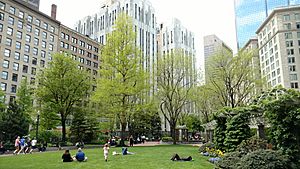 Post Office Square (est. 1874) in Boston, Massachusetts is located in the financial district at the intersection of Milk, Congress, Pearl and Water Streets. It was named in 1874 after the United States Post Office and Sub-Treasury which fronted it, now replaced by the John W. McCormack Post Office and Courthouse.

As of 2009 the square is almost entirely occupied by a privately owned and managed but publicly accessible park, Norman B. Leventhal Park, named for the Boston building manager and designer who designed it. It sits above a parking garage, named "The Garage at Post Office Square." The garage lies 80 feet (24 m) below the surface, the deepest point of excavation in the city. Revenues from parking fund the maintenance of the park. The 1.7-acre (0.69 ha) park is a popular lunchtime destination for area workers. It features a cafe, fountains, and a pergola around a central lawn, and the management provides seat cushions for visitors during the summer. Designed by landscape architects The Halvorson Company, the park is also home to "125 species of plants." 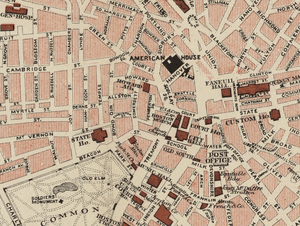 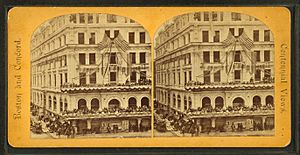 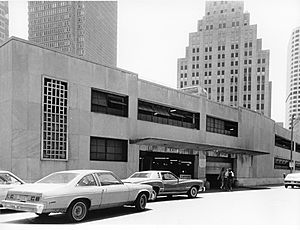 Garage in Post Office Square that was demolished to make way for the creation of Norman B. Leventhal Park.

Post Office Square was the site of a 1964 speech by Lyndon B. Johnson.

There was a transformer explosion and fire in the One Post Office Square building in December 1986. An electric company worker was killed but fortunately it was after normal business hours and the building was able to be evacuated with only a few injuries.

It was also the site of the now-closed Boston Claim Assistance Site of the September 11th Victim Compensation Program.

Significant buildings on the square include the following:

All content from Kiddle encyclopedia articles (including the article images and facts) can be freely used under Attribution-ShareAlike license, unless stated otherwise. Cite this article:
Post Office Square, Boston Facts for Kids. Kiddle Encyclopedia.