Newberg is a city in Yamhill County, Oregon, United States. Located in the Portland metropolitan area, the city is home to George Fox University. As of the 2010 census, the city population was 22,110 making it the second most populous city in the county. 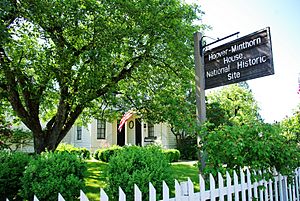 Ewing Young, after leading pioneering fur brigades in California, came to Portland in 1834 and settled on the west bank of the Willamette River near the mouth of Chehalem Creek, opposite of Champoeg. Young's home is believed to be the first house built by European-Americans on that side of the river. Later, Joseph Rogers settled near the Willamette River at what is now Newberg in 1848. The community was known early on as Chehalem, and later as Roger's Landing for Rogers who founded the settlement, and who died in 1855. In 1883, the community was platted. Incorporated in 1889, tradition holds that this town was named by its first postmaster, Sebastian Brutscher, for his former hometown of Neuberg in Germany. One of the current streets, Brutscher Street, is named after him.

Newberg was one of the first communities in Oregon to hold Quaker services. It was incorporated as a city in 1889. The city's oldest surviving newspaper, The Newberg Graphic, was established Dec. 1, 1888. Friends Pacific Academy, renamed Pacific College in 1891 and then George Fox University in 1949, was founded by the Quakers in 1885. George Fox University is classified by U.S. News & World Report as a first-tier regional university and "Best Value" school. The campus resides in the center of the city, surrounded by university-owned housing.

Herbert Hoover moved to the city in 1885, to live with his uncle and aunt after the death of his parents and was one of the first students to attend his uncle's Pacific Academy The home has been turned into the Hoover-Minthorn House museum.

The town was "dry", meaning no alcohol could be sold within the city limits, for a good part of its early history.

Newberg is located on Oregon Route 99W about 25 miles (40 km) southwest of Portland, Oregon. Springbook, once a separate community, is now considered part of Newberg. 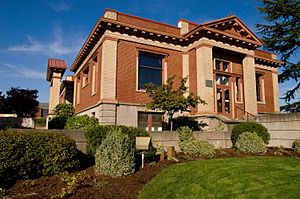 There were 7,736 households, of which 37.4% had children under the age of 18 living with them, 53.1% were married couples living together, 12.0% had a female householder with no husband present, 4.7% had a male householder with no wife present, and 30.2% were non-families. 23.2% of all households were made up of individuals, and 9.8% had someone living alone who was 65 years of age or older. The average household size was 2.66 and the average family size was 3.12.

Newberg is served by the Portland & Western Railroad which offers freight service as needed. The railroad was originally part of the Southern Pacific Railroad and was built in the 1870s. Newberg has not had regular passenger railroad service since the 1930s; however there have been several studies to consider bringing commuter rail service to the Portland metropolitan area. 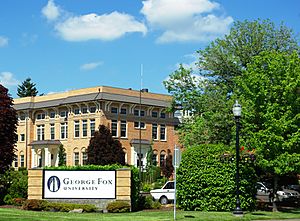 As of 2002, dental equipment manufacturer A-dec was the city's largest employer with 832 employees, and George Fox University was second with 400. The next largest employers were SP Newsprint Co., Suntron Corp., and Providence Newberg Medical Center. Upon opening in September 2009, The Allison Inn and Spa, a 77-room destination hotel, spa, and restaurant employs approximately 200 full-time workers. A Hazelden Betty Ford Foundation inpatient addiction treatment center is located in the city.

In September 2021, the Newberg School District received news coverage over several incidents involving racism and identity, starting when the school board voted to ban Pride and Black Lives Matter symbols in district schools. Later on in the month, Newberg High School students participated in a "virtual slave trade" which targeted black students at the school. On September 20, a Newberg Public Schools employee was placed on administrative leave after reporting for work while wearing blackface.

All content from Kiddle encyclopedia articles (including the article images and facts) can be freely used under Attribution-ShareAlike license, unless stated otherwise. Cite this article:
Newberg, Oregon Facts for Kids. Kiddle Encyclopedia.