Woodburn is a city in Marion County, Oregon, United States. Incorporated in 1889, the community had been platted in 1871 after the arrival of the railroad. The city is located in the northern end of the Willamette Valley between Portland and Salem. Interstate 5 connects it to major cities to the north and south. Oregon routes 211, 214, 219, and 99E also serve the city, as do Union Pacific and Willamette Valley Railway freight rail lines.

Woodburn is part of the Salem Metropolitan Statistical Area. With a population of 24,080 at the 2010 census, it is the third-most populous in that metropolitan area after Salem and Keizer. Those who identify as Hispanic or Latino make up a majority of the population in the city. The Woodburn area also has a significant historic population of Russian Orthodox Old Believers, whose ancestors settled here after the October Revolution of 1917. 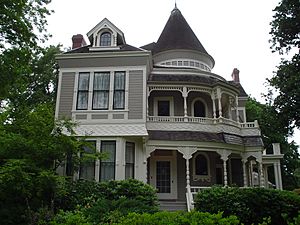 Originally, the area around Woodburn was inhabited by the Kalapuya Native Americans. After the Provisional Government of Oregon set-up land claims in the Oregon Country, the United States annexed much of the Pacific Northwest and established the Oregon Territory in 1848. Congress passed the Donation Land Claim Act in 1850 and many earlier land claims became donation land claims.

Eli C. Cooley, Bradford S. Bonney, George Leisure, and Jean B. Ducharme all established donation land claims on the eastern part of the French Prairie where Woodburn would later be founded. Cooley immigrated to Oregon in 1845, and Bonney established his land claim in 1849. Ducharme's land was sold off in 1862 in a foreclosure with Mt. Angel farmer George Settlemier purchase the 214 acres (87 ha) on the cheap.

Settlemier had traveled west over the Oregon Trail in 1849 and first settled in California before moving north to Oregon in 1850. He settled in the Mt. Angel area where he was a successful nurseryman. Settlemier then moved to his new property in 1863 and established the Woodburn Nursery Company. Despite improvements to the land, including construction of his home, title in the land remained in doubt due to the purchase via a foreclosure.

During the litigation over title in the land, Settlemier borrowed money from capitalist William Reed with the land as collateral. When Reed began to build a railroad through the area, he decided to run the line through what became Woodburn in anticipation of acquiring the land himself, as he expected Settlemier to default on the mortgage. However, Settlemier did not default and eventually his case made it to the Supreme Court of the United States in Settlemier v. Sullivan, 97 U.S. 444 (1878). He gained a favorable ruling and retained the land.

Meanwhile, transportation baron Ben Holladay ran his Oregon and California Railroad through what became Woodburn in 1871, at which time Settlemier platted the first four blocks of the town.

Originally, the town and station were called Halsey, but the name was changed to Woodburn due to the existence of Halsey, Oregon, further down the valley. The name Woodburn came about after a slash burn that got out of control and burned down a nearby woodlot in the 1880s, after the railroad line had been laid through the area. A railroad official witnessed the fire and renamed the community. The city was incorporated by the Oregon Legislative Assembly on February 20, 1889.

There were 7,545 households of which 35.9% had children under the age of 18 living with them, 53.8% were married couples living together, 11.6% had a female householder with no husband present, 5.9% had a male householder with no wife present, and 28.8% were non-families. 24.0% of all households were made up of individuals and 15.6% had someone living alone who was 65 years of age or older. The average household size was 3.17 and the average family size was 3.74.

Woodburn is home for a sizable community of Russian Orthodox Old Believers. This Christian traditionalist church had escaped persecution from the official Russian Orthodox Church and moved to the United States from Turkey in the 1950s. Its women wear traditional long skirts and scarfs, and men have beards.

Also present in the city are communities of Russian Molokans, Doukhobors and recent refugees from the former USSR: Ukrainian and Russian Pentecostals and Baptists. 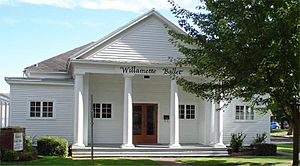 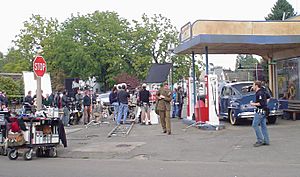 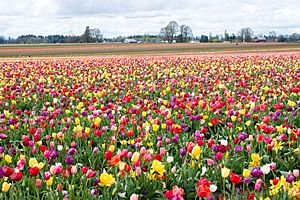 Tulip Festival in Woodburn in 2007

Willamette Ballet Academy was founded in 1982.

Scenes from 2007 Hallmark Hall of Fame production The Valley of Light, starring Chris Klein, were filmed in Woodburn.

Listed in 1974 on the National Register of Historic Places, the Jesse H. Settlemier House is a museum located on Settlemier Avenue.

La Fiesta Mexicana is the most important Hispanic event in the area. Each fiesta should include a queen; Francisca Gonzalez was the first selected to receive this honor in the first fiesta in 1964. It was a one-day event that was held in downtown Woodburn. Forty-five years later, the event grew more popular and now it currently lasts close to a week. One of the main reasons this event happened was that the ranchers and merchants recognized the importance of the new bicultural relationship with the increased Hispanic population in the area.

All content from Kiddle encyclopedia articles (including the article images and facts) can be freely used under Attribution-ShareAlike license, unless stated otherwise. Cite this article:
Woodburn, Oregon Facts for Kids. Kiddle Encyclopedia.