Katherine Lynne Bjelland (born December 9, 1963) is an American singer, songwriter, musician and guitarist. She rose to prominence as the lead singer, guitarist, and songwriter of the alternative rock band Babes in Toyland, which she formed in Minneapolis, Minnesota in 1987. She has been noted for her unusual vocal style alternately consisting of shrill screams, whispering, and speaking in tongues, as well as for her guitar playing style, which incorporates "jagged" tones with "psychotic rockabilly rhythms." 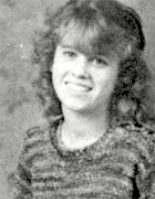 Born in Salem, Oregon, Bjelland was raised in nearby Woodburn, and learned to play guitar as a teenager from her uncle, with whom she performed in his band shortly after graduating high school. She attended Woodburn High School, where she played on the school basketball team and was a cheerleader.

After graduating from high school in 1982, Bjelland briefly enrolled at the University of Oregon, but dropped out after her freshman year and relocated to Portland at age nineteen. She became introduced to punk music after attending a Wipers concert in Portland: "I didn't know about punk rock that much," she recalled, she became involved in the city's punk rock scene; there, she met Courtney Love and the two became friends, forming the band Pagan Babies, which they relocated to San Francisco. 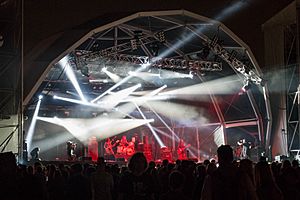 After the dissolution of Pagan Babies in 1985, Bejalland relocated to Minneapolis, where she formed Babes in Toyland. Babes in Toyland formally disbanded in 2001. She remained out of the public light for several years before publicly revealing in 2007 that she had been diagnosed with schizoaffective disorder. In 2015, she reunited with Babes in Toyland, in February 2015, the band played their first live show together in fourteen years in Joshua Tree, California, and performed additional shows on an international tour throughout 2015. Bjelland commented that she intended to write new material, but that it would be concerned with "less anger about people. Now it's about things that are going on in the world.

All content from Kiddle encyclopedia articles (including the article images and facts) can be freely used under Attribution-ShareAlike license, unless stated otherwise. Cite this article:
Kat Bjelland Facts for Kids. Kiddle Encyclopedia.