Keizer is a city located in Marion County, Oregon, United States, along the 45th parallel. As of the 2010 United States Census, its population was 36,478. It lies inside of the Willamette Valley and is part of the Salem Metropolitan Statistical Area. It was named after brothers Thomas Dove (T. D.) and John Brooks (J. B.) Keizur, two pioneers who arrived in the Wagon Train of 1843, and later filed donation land claims.

The original settlement was at Keizer Bottom, near the banks of the Willamette River. The community was named after Thomas Dove Keizur, one of its first settlers. Somewhere in the translation of donation land claim records, his name was misspelled. The settlement suffered in the flood of 1861, and the inhabitants rebuilt their homes on higher ground. Further floods in 1943, 1945, 1946 and 1948 hampered the growth of the community, and it was not until dams were built in the 1950s to regulate the flow of the Willamette that Keizer began to flourish.

Many times the City of Salem tried to annex the growing community adjacent to its city limits. Beginning in 1964, a number of Keizer residents tried to convince the people of Keizer that it would be cheaper and better to form their own city. It was not until November 2, 1982, when, with the support of the nearby unincorporated community of Clear Lake, residents voted to make Keizer a city. 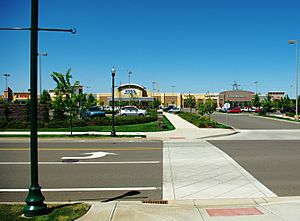 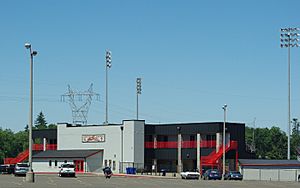 There were 13,703 households of which 36.9% had children under the age of 18 living with them, 51.0% were married couples living together, 13.3% had a female householder with no husband present, 5.0% had a male householder with no wife present, and 30.7% were non-families. 24.2% of all households were made up of individuals and 10.3% had someone living alone who was 65 years of age or older. The average household size was 2.64 and the average family size was 3.13.

The annual Iris Festival takes place in May and showcases Keizer's iris-growing industry. The festival was founded by Schreiner's Iris Gardens, one of the country's largest retail iris growers, and has been facilitated by the Keizer Chamber of Commerce since 1987. Events include a carnival, a beer garden, craft and food vendors, a 5k walk/run, a vintage car show, and a parade.

Every year from the beginning of December until the day after Christmas the Gubser school neighborhood hosts the "Keizer Miracle of Christmas Lighting Display." Many of the neighborhood's residents decide to put up Christmas lights along with other various holiday themed displays. Up to 20,000 vehicles visit the approximately 3.5-mile (5.6 km) route each year. Along the route visitors are able to donate canned foods and non-perishable items. In 2007 19,000 pounds (8,600 kg) of food were collected for the Marion Polk Food Share and $17,100 was received in cash.

All content from Kiddle encyclopedia articles (including the article images and facts) can be freely used under Attribution-ShareAlike license, unless stated otherwise. Cite this article:
Keizer, Oregon Facts for Kids. Kiddle Encyclopedia.