Scholls, Oregon is an unincorporated community in Washington County, Oregon, United States. It is located along the southern shore of the Tualatin River, near the intersection of Oregon Routes 210 and 219. Scholls is located approximately seven miles north of Newberg, seven miles west of Tigard and eight miles south of Hillsboro. The area around Scholls is primarily agricultural. 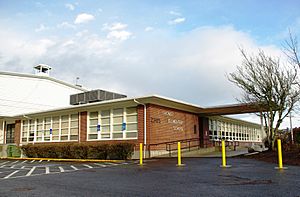 According to Oregon Geographic Names, the community was named after local pioneer Peter Scholl, who took up a donation land claim in 1847. Scholls was once the site of an important ferry (the Scholls Ferry) crossing the Tualatin River between Scholls and nearby Kinton. While the ferry has long since been replaced with a bridge, OR 210 is still known locally as Scholls Ferry Road.

Peter Scholl was a relative of Daniel Boone, probably related through Boone's grandson Alphonso Boone, an Oregon pioneer who built Boones Ferry. A general store has operated in the community since the 1890s, and was purchased by the Petrich family in 1964. The original Petrichs General Store burned down in 1994.

Scholls is in Oregon's wine country, and there are several notable wineries are in the area, including the Raptor Ridge Winery, which produces award winning wines such as Pinot gris, Pinot noir, Gruner Veltliner, Tempranillo, and Chardonnay.

Campo Azul is a migrant camp on a farm near Scholls. The camp, which was founded in the 1970s, was named for the color of the shacks on the 133-acre (0.54 km2) farm. It was reported that 90 or so adults and children lived on the camp, paying $125 per month rent per person. According to The Oregonian, the camp had initially been considered as a location for the New Thought church Living Enrichment Center, but instead it became the most heavily fined migrant camp in Oregon. Upon the death of Loraine Boggs, the ownership of the camp was in dispute. Only after various legal negotiations was ownership of the farm settled. The camp was sold in 2004, and by 2009 the new owners had plans to turn it into a farming community.

All content from Kiddle encyclopedia articles (including the article images and facts) can be freely used under Attribution-ShareAlike license, unless stated otherwise. Cite this article:
Scholls, Oregon Facts for Kids. Kiddle Encyclopedia.