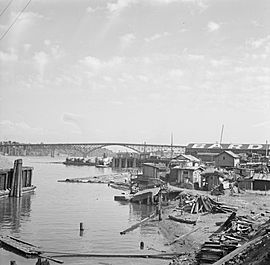 A Hooverville near Portland, Oregon.

Most Hoovervilles were made out of any materials people could find, including crates, cardboard, and scraps of metal. They usually had a small stove, a bed, and some cooking instruments. People who were living in Hoovervilles without jobs created public charities or asked for food from people with houses.

One well-known Hooverville was in Central Park in New York City, where people lived on the Great Lawn, which was then an empty reservoir.

All content from Kiddle encyclopedia articles (including the article images and facts) can be freely used under Attribution-ShareAlike license, unless stated otherwise. Cite this article:
Hooverville Facts for Kids. Kiddle Encyclopedia.