Basilosaurus is a genus of cetacean that lived from 40 to 34 million years ago in the Late Eocene. The first Basilosaurus fossils were found in Louisiana, USA, but another species was soon discovered preserved in large numbers in the Fayum deposits of Egypt.

The first fossil of B. cetoides was discovered in the United States and was initially believed to be some sort of reptile, hence the suffix -"saurus", but it was later found to be a marine mammal. Richard Owen wanted to rename the creature Zeuglodon ("yoked tooth"), but by taxonomic rules the creature's first name remained permanent. Fossils of B. isis have been found in Egypt and Jordan. B. drazindai was described based on a single vertebra found in Pakistan.

Far from being a marine reptile, Basilosaurus is a stage in the evolution of whales. At 40–65 ft (12–20 m), Basilosaurus cetoides was one of the largest oceanic animals of its time.

Measuring 15–18 m (49–59 ft), Basilosaurus cetoides is one of the largest known animals to exist from K/T Extinction Event 66 million years ago to around 15 million years ago when modern cetaceans began to reach enormous sizes. B. isis is slightly smaller than B. cetoides.

Skull of B. cetoides at the North American Museum of Ancient Life

The dental formula for B. isis is 3.1.4.23.1.4.3. The upper and lower molars and second to fourth premolars are double-rooted and high-crowned.

The head of Basilosaurus did not have room for a melon like modern toothed whales, and the brain was smaller in comparison, as well. They are not believed to have had the social capabilities of modern whales.

Fahlke and others 2011 concluded that the skull of Basilosaurus is asymmetrical like in modern toothed whales, and not, as previously assumed, symmetrical like in baleen whales and artiodactyls closely related to cetaceans. In modern toothed whales, this asymmetry is associated with high-frequency sound production and echolocation, neither of which is thought to be present in Basilosaurus. This cranial torsion probably evolved in protocetids and basilosaurids together with directional underwater hearing and the sound-receiving apparatus in the mandible (the auditory fat pad and the pan bone (thin portion of mandible).)

In the basilosaur skull, the inner and middle ear are enclosed by a dense tympanic bulla. The synapomorphic cetacean air sinus system is partially present in basilosaurids, including the pterygoid, peribullary, maxillary, and frontal sinuses. The periotic bone, which surrounds the inner ear, is partially isolated. The mandibular canal is large and laterally flanked by a thin bony wall, the pan bone or acoustic fenestra. These features enabled basilosaurs to hear directionally in water.

The ear of basilosaurids is more derived than those in earlier archaeocetes, such as remingtonocetids and protocetids, in the acoustic isolation provided by the air-filled sinuses inserted between the ear and the skull. The basilosaurid ear did, however, have a large external auditory meatus, strongly reduced in modern cetaceans, but though this was probably functional, it can have been of little use under water.

Recent studies revealed that Basilosaurus isis had a power bone crushing bite, exerting over 3,800 to 4,500 pounds per square inch, arguably the strongest bite force of any mammal, in order to crack open the skulls of young Dorudon, which were its preferred prey based on the bite marks found on the skulls of the Dorudon. Eric Snively, Robert Welsh and Julia Fahlke, the authors of the article speculate the Basilosaurus isis was an active predator rather than a scavenger. 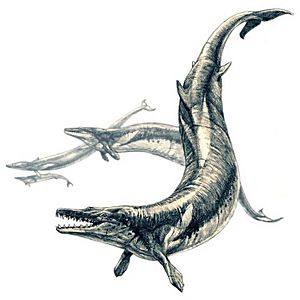 Restoration of a group

A complete Basilosaurus skeleton was found in 2015, and several attempts have been made to reconstruct the vertebral column from partial skeletons. Kellogg 1936 estimated a total of 58 vertebrae, based on two partial and nonoverlapping skeletons of B. cetoides from Alabama. More complete fossils uncovered in Egypt in the 1990s allowed a more accurate estimation: the vertebral column of B. isis has been reconstructed from three overlapping skeletons to a total of 70 vertebrae with a vertebral formula interpreted as seven cervical, 18 thoracic, 20 lumbar and sacral, and 25 caudal vertebrae. The vertebral formula of B. cetoides can be assumed to be the same.

Basilosaurus has an anguilliform (eel-like) body shape because of the elongation of the centra of the thoracic through anterior caudal vertebrae. In life, these vertebrae were filled with marrow, and because of the enlarged size, made them buoyant. From this it can be deduced that Basilosaurus swam predominantly in two dimensions at the sea surface, in contrast to the smaller Dorudon, which was probably a diving, three-dimensional swimmer. The skeletal anatomy of the tail suggests that a small fluke was probably present, which would have aided only vertical motion. Most reconstructions show a small, speculative dorsal fin similar to a rorqual's, but other reconstructions show a dorsal ridge.

A 16 m (52 ft) individual of B. isis had 35 cm (14 in) long hind limbs with fused tarsals and only three digits. The limited size of the limb and the absence of an articulation with the sacral vertebrae, makes a locomotory function unlikely. Analysis has shown that the reduced limbs could rapidly adduct between only two positions. 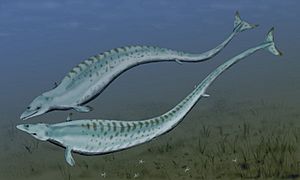 Artist's conception of a pair of B. cetoides

Basilosaurus probably relied on unusual modes of locomotion, relative to other cetaceans; similarly sized thoracic, lumbar, sacral, and caudal vertebrae imply that it moved in an anguilliform fashion, but predominantly in the vertical plane. Paleontologist Philip D. Gingerich theorized that Basilosaurus may also have moved in a very odd, horizontal anguilliform fashion to some degree, something completely unknown in modern cetaceans.

The vertebrae appear to have been hollow, and likely also fluid-filled. This would imply that Basilosaurus typically functioned in only two dimensions at the ocean surface, compared with the three-dimensional habits of most other cetaceans. Judging from the relatively weak axial musculature and the thick bones in the limbs, Basilosaurus is not believed to have been capable of sustained swimming or deep diving, or terrestrial locomotion.

The cheek teeth of Basilosaurus retain a complex morphology and functional occlusion. Heavy wear on the teeth reveals that food was first chewed then swallowed. Scientists were able to estimate the bite force of Basilosaurus by analyzing the scarred skull bones of another species of prehistoric whale, Dorudon. By the damage caused, the aquatic predator could chomp down with a skull-crushing force of more than 3600 pounds.

Analyses of the stomach contents of B. cetoides has shown that this species fed exclusively on fishes and sharks, while bite marks on the skulls of juvenile Dorudon have been matched with the dentition of B. isis, suggesting a dietary difference between the two species, similar to that found in different populations of modern killer whales.

All content from Kiddle encyclopedia articles (including the article images and facts) can be freely used under Attribution-ShareAlike license, unless stated otherwise. Cite this article:
Basilosaurus Facts for Kids. Kiddle Encyclopedia.