Evolution of cetaceans facts for kids 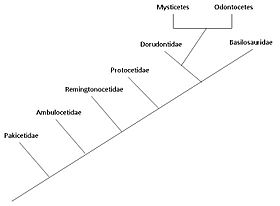 A phylogeny showing the relationships among cetacean families.

The Cetaceans (whales, dolphins and porpoises) are mammalian marine descendants of land mammals. Their terrestrial origins are indicated by:

The question of how land animals evolved into ocean-going leviathans was a mystery until recent discoveries in Pakistan revealed several stages in the transition of cetaceans from land to sea.

Possible relationships between cetaceans and other ungulate groups.

Hippo fossils are not found until the Miocene, but whale ancestors have been found from the Eocene. This leaves a gap of nearly 30 million years where no hippo ancestors are found. The most recent hypothesis is that hippos and whales shared a common semi-aquatic ancestor which branched off from other Artiodactyls around 60 million years ago (mya). This ancestral group probably split into two branches around 54 mya. One branch evolved into cetaceans, possibly beginning with the proto-whale Pakicetus from 52 mya. These early cetaceans gradually became adapted to life in the sea. They became the completely aquatic cetaceans.

Some modern whales have traces of their land-dwelling ancestors. The skeleton of a Bowhead whale shows its hind limb and pelvic bone structure (circled in red). This bone structure stays inside its body its entire life: it is a vestigial structure.

Indohyus is a small deer-like creature, which lived about 48 million years ago in Kashmir. It belongs to the artiodactyls family Raoellidae, and is believed to be the closest sister group of Cetacea.

About the size of a raccoon or domestic cat, this herbivorous creature shared some of the traits of whales. It also showed signs of adaptations to aquatic life, including a thick and heavy outer bone coating. This is similar to the bones of modern creatures such as the hippopotamus, and reduces buoyancy so that they can stay underwater. This suggests a similar survival strategy to the African mousedeer or water chevrotain which, when threatened by a bird of prey, dives into water and hides beneath the surface for up to four minutes.

Scientists from the University of Plymouth studied many animals that dive and hold their breath, from insects to whales, and they found that larger animals can hold their breath longer than smaller animals because they can store more oxygen for their size, and this difference was much bigger for warm-blooded animals than for cold-blooded animals. They said this may be why modern whales and extinct diving animals like plesiosaurs became so large.

All content from Kiddle encyclopedia articles (including the article images and facts) can be freely used under Attribution-ShareAlike license, unless stated otherwise. Cite this article:
Evolution of cetaceans Facts for Kids. Kiddle Encyclopedia.