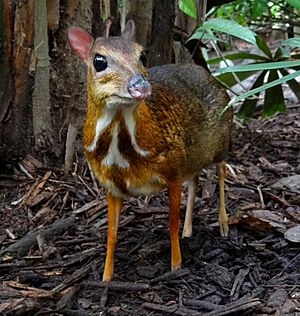 Chevrotains, also known as mouse deer, are small even-toed ungulates that make up the family Tragulidae

Mouse deer live in Asia. They are about the size of a hare, with short, thin legs. They stamp their small feet to signal to each other. Mouse deer are extremely nervous. When they are surprised, they freeze immediately, and then run away in a zig-zag through the forest.

The family is widespread and successful from the Oligocene (34 million years ago) through the Miocene (about 5 million years ago), but has remained almost unchanged over that time and remains as an example of primitive ruminant form. They have four-chambered stomachs to ferment tough plant foods, but the third chamber is poorly developed. Though most species feed exclusively on plant material, the water chevrotain occasionally takes insects and crabs, or scavenges meat and fish. Like other ruminants, they lack upper incisors. They give birth to only a single young.

In other respects, however, they have primitive features, closer to nonruminants such as pigs. All species in the family lack antlers and horns, but both sexes have elongated canine teeth. These are especially prominent in males, where they project out on either side of the lower jaw, and are used in fights. Their legs are short and thin, which leave them lacking in agility, but also helps to maintain a smaller profile to aid in running through the dense foliage of their environments. Other pig-like features include the presence of four toes on each foot. 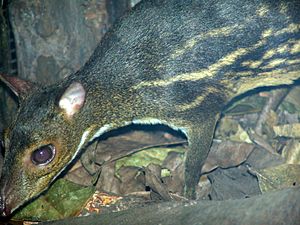 Some of the species show a remarkable affinity with water, often remaining submerged for prolonged periods to evade predators or other unwelcome intrusion. This has also lent support to the idea that whales evolved from water-loving creatures that looked like small deer.

All content from Kiddle encyclopedia articles (including the article images and facts) can be freely used under Attribution-ShareAlike license, unless stated otherwise. Cite this article:
Mouse deer Facts for Kids. Kiddle Encyclopedia.