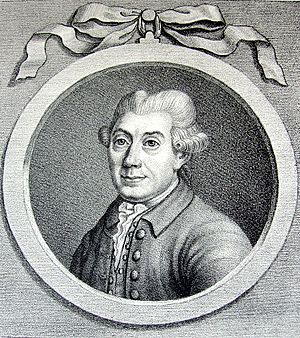 Niebuhr was the son of a Hanoverian farmer. He was self-educated. He travelled throughout the Middle East including Arabia, Persia (Iran), Syria and India. He was the only surviving member of a Danish/German team after the others died from illness and malaria. He wrote at least two books on his trips to the region which were later translated in to English and published in two volumes in the 1790s. Later editions were published around 1825.

Niebuhr’s maps of the region including Sinus Persicus, made about 1765 of the Persian Gulf is considered one of the most accurate of his time and was used for nearly 100 years.

All content from Kiddle encyclopedia articles (including the article images and facts) can be freely used under Attribution-ShareAlike license, unless stated otherwise. Cite this article:
Carsten Niebuhr Facts for Kids. Kiddle Encyclopedia.