Flag of Lithuania facts for kids 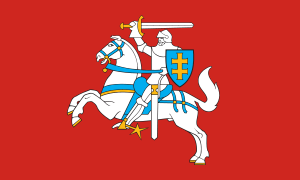 The State flag of Lithuania represents Vytis - a horseman who fights enemies. It is required to use in the Royal Palace of Lithuania, Trakai Island castle as well as in Vytautas the Great's Miliary museum in Kaunas

The Flag of Lithuania that is used today was adopted by the Council of Lithuania in 1918 and re-adopted in 1989. Some ratio changes were made in 2004. Today the flag consists of three equal oblongs, each coloured yellow, green and red (top to bottom). The flag's ratio is 3:5 (1:2 in 1989). It is used as a national flag and civil ensign.

Special days for the flag

The table below shows the dates when the flag should be flown:

All content from Kiddle encyclopedia articles (including the article images and facts) can be freely used under Attribution-ShareAlike license, unless stated otherwise. Cite this article:
Flag of Lithuania Facts for Kids. Kiddle Encyclopedia.