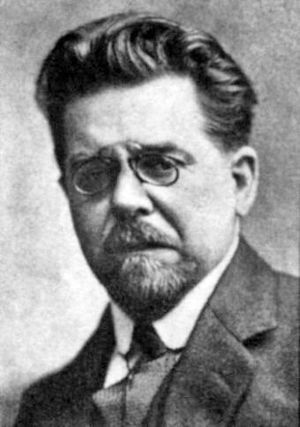 Władysław Stanisław Reymont, born as Stanisław Władysław Rejment, (May 7, 1867 in Kobielce Wielkie, Poland - December 5, 1925 in Warsaw, Poland) was a well-known Polish writer, who won the Nobel Prize in 1924 for his four-volume epic novel "Chłopi" (The Peasants). This novel was about life of this part of the society. He also wrote "Ziemia obiecana" (The Promised Land), about industrial capitalism in 19th century Łódź.

Reymont was born in the family of the organist. His father, Józef Rejment, well-read man, had a musical education and in tuszyńskiej performed the parish duties of the organist, and also carried on Civil Status Registers and the correspondence of the parish priest with Russian authorities. Mother, Antonia from Kupczyńskich, had talent for a story. She came from the impoverished Cracow gentry; in mature years the writer has often emphasized this fact.

All content from Kiddle encyclopedia articles (including the article images and facts) can be freely used under Attribution-ShareAlike license, unless stated otherwise. Cite this article:
Władysław Reymont Facts for Kids. Kiddle Encyclopedia.