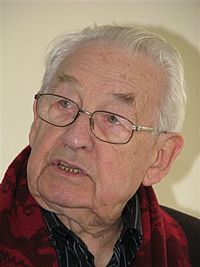 Andrzej Witold Wajda (6 March 1926 – 9 October 2016) was a Polish movie director, movie producer, and screenwriter. He is known for his works in A Generation, Kanał, Ashes and Diamonds, Man of Iron, The Promised Land, The Maids of Wilko, and in Katyń. He won an Honorary Academy Award in 2000.

Wajda was born in Suwałki, Poland. He studied at the Łódź Film School. Wajda was married four times, first three ended in divorce. He had a daughter.

Wajda died of respiratory failure on 9 October 2016 at a hospital in Warsaw, aged 90.

All content from Kiddle encyclopedia articles (including the article images and facts) can be freely used under Attribution-ShareAlike license, unless stated otherwise. Cite this article:
Andrzej Wajda Facts for Kids. Kiddle Encyclopedia.