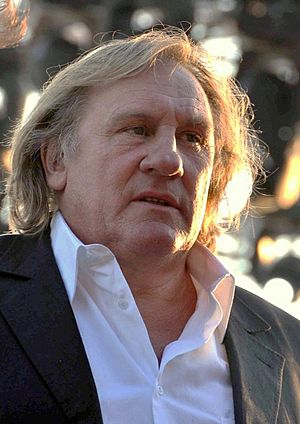 Gérard Xavier Marcel Depardieu (born 27 December 1948) is a French actor, movie producer and director. He was born in Chateauroux, Indre. He is one of the most prolific actors in film history, having completed approximately 170 movies since 1967.

He lives in Belgium. In 2013 he was granted Russian citizenship.

All content from Kiddle encyclopedia articles (including the article images and facts) can be freely used under Attribution-ShareAlike license, unless stated otherwise. Cite this article:
Gérard Depardieu Facts for Kids. Kiddle Encyclopedia.