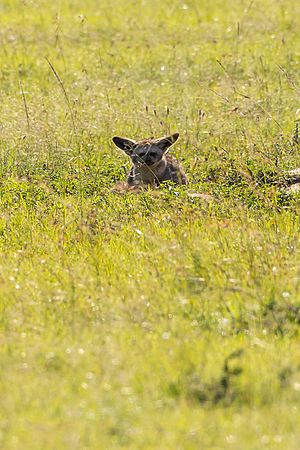 The bat-eared fox (Otocyon megalotis) is a species of fox found on the African savanna, named for its large ears, which are used for thermoregulation. It has also been called a Sub-Saharan African version of a fennec fox due to their huge ears.

Description The bat-eared fox (also referred to as Delalande's fox, long-eared fox, big-eared fox, and black-eared fox) has tawny fur with black ears, legs, and parts of the pointed face. It averages 55 centimetres (22 in) in length (head and body), with ears 13 centimetres (5.1 in) long.

Two allopatric populations (subspecies) occur in Africa. O. m. virgatus occurs from Ethiopia and southern Sudan to Tanzania. The other population, O. m. megalotis, occurs in the southern part of Africa. It ranges from southern Zambia and Angola to South Africa, and extends as far east as Mozambique and Zimbabwe, spreading into the Cape Peninsula and toward Cape Agulhas. Home ranges vary in size from 0.3 to 3.5 km2.

The bat-eared fox commonly inhabits short grasslands, as well as the more arid regions of the savanna. It prefers bare ground and areas where grass is kept short by grazing ungulates. It tends to hunt in these short grass and low shrub habitats. However, it does venture into areas with tall grasses and thick shrubs to hide when threatened.

In addition to raising their young in dens, bat-eared foxes use self-dug dens for shelter from extreme temperatures and winds. They also lie under acacia trees in South Africa to seek shade during the day. 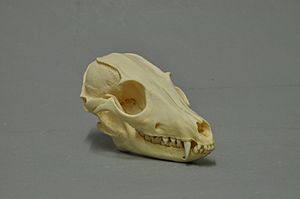 Skull of a bat eared fox

The bat-eared fox is predominantly an insectivore that uses its large ears to locate its prey. About 80–90% of their diet is harvester termites (Hodotermes mossambicus). When this particular species of termite is not available, they feed on other species of termites and have also been observed consuming other arthropods such as ants, beetles, crickets, grasshoppers, millipedes, moths, scorpions, spiders, and rarely birds, small mammals, reptiles, and fungi (the desert truffle Kalaharituber pfeilii). The insects they eat fulfill the majority of their water intake needs. The bat-eared fox refuses to feed on snouted harvester termites, likely because it is not adapted to tolerate termites' chemical defense.

Bat-eared foxes usually hunt in groups, mostly in pairs and groups of three. Individuals forage alone after family groups break in June or July and during the months after cub birth. Prey is located primarily by hearing, rather than by smell or sight.

Foraging is almost exclusively diurnal during the winter it usually occurs in patches, which match the clumped prey resources, such as termite colonies, that also occur in patches. Groups are able to forage on clumps of prey in patches because they do not fight each other for food due to their degree of sociality and lack of territoriality. 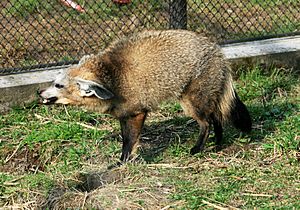 Bat-eared foxes are highly social animals. They often live in pairs or groups of up to 15 individuals, and home ranges of groups either overlap substantially or very little. Individuals forage, play, and rest together in a group, which helps in protection against predators. Social grooming occurs throughout the year, mostly between mature adults, but also between young adults and mature adults.

The Gestation lasts for 60–70 days and females give birth to litters consisting of one to six kits. Beyond lactation, which lasts 14 to 15 weeks, males take over grooming, defending, huddling, chaperoning, and carrying the young between den sites. The female forages for food, which she uses to maintain milk production, on which the pups heavily depend.

The bat-eared fox has some commercial use for humans. They are important for harvester termite population control, as the termites are considered pests. They have also been hunted for their fur by Botswana natives. Additional threats to populations include disease and drought that can harm populations of prey; however, no major threats to bat-eared fox populations exist.

All content from Kiddle encyclopedia articles (including the article images and facts) can be freely used under Attribution-ShareAlike license, unless stated otherwise. Cite this article:
Bat-eared fox Facts for Kids. Kiddle Encyclopedia.