The Falkland Islands Fox or Warrah used to live on the Falkland Islands. They were blamed for killing sheep, but it is not known if they did or not. The last fox died in 1876. This species probably fed on penguins, seals and vegetation.

It was the only native land mammal of the Falkland Islands. 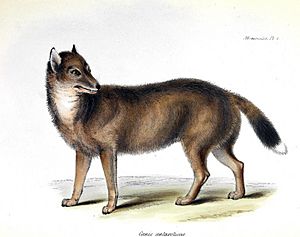 Illustration of "Dusicyon australis" from Zoology of the Voyage of H.M.S. Beagle

Traditionally it had been supposed that the most closely related genus was Lycalopex, including the Culpeo, which has been introduced to the Falkland Islands in modern times. However, in 2009, DNA analysis identified the Falkland Island fox's closest living relative as the maned wolf (Chrysocyon brachyurus) an unusually long-legged, fox-like South American canid, from which it separated about 6.7 million years ago.

The Falkland Islands wolf existed on both West and East Falkland, but Charles Darwin was uncertain if they were differentiated varieties. Its fur had a tawny colour and the tip of the tail was white. Its diet is unknown, but, due to the absence of native rodents on the Falklands, probably consisted of ground-nesting birds such as geese and penguins, grubs and insects, as well as seashore scavenging. It has sometimes been said that it may have lived in burrows.

All content from Kiddle encyclopedia articles (including the article images and facts) can be freely used under Attribution-ShareAlike license, unless stated otherwise. Cite this article:
Falkland Island Fox Facts for Kids. Kiddle Encyclopedia.