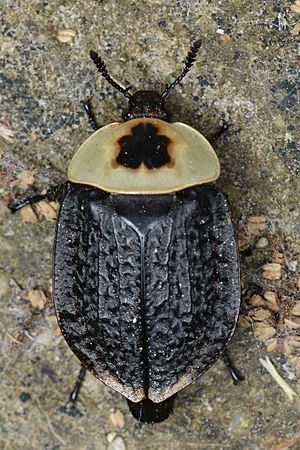 Carrion beetle is the name for a group of beetles, where the larvae feed on raw flesh. They are also known as large carrion beetles or burying beetles. They are the the family Silphidae, which belongs to the order Coleoptera.

Over 180 species of such beetles are known. They lay their eggs into raw flesh, and the lavae feed on raw flesh (or dead animals). Sometimes the adults hunt and kill the larvae of other insects.

Most carrion beetles only walk: they have lost the power of flight. The do walk for long distances in search of dead animals to lay their eggs on.

Most species occur on the northern hemisphere, in temperate climates. Often, they can be found in grassland or woodland areas. In the tropical climates they occur mostly in the mountains, where it is colder. They are not present in the desert.

All content from Kiddle encyclopedia articles (including the article images and facts) can be freely used under Attribution-ShareAlike license, unless stated otherwise. Cite this article:
Carrion beetle Facts for Kids. Kiddle Encyclopedia.