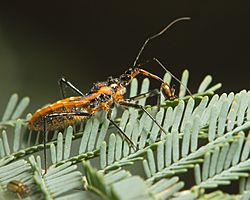 Assassin bugs are the Reduviidae. They are a large cosmopolitan family of "true bugs" or Hemiptera.

They are almost all terrestrial ambush predators. Most members of the family are easy to recognise: they have a relatively narrow neck, sturdy build and formidable curved proboscis. Large specimens should be handled with care, if at all, because they may defend themselves with a very painful stab from the proboscis. 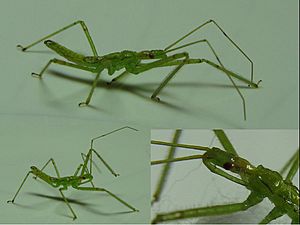 A Zelus nymph from the Southeastern United States

Adult insects range from about 4.0 to 40 mm, depending on the species. They most commonly have an elongated head with a distinct narrowed 'neck', long legs, and prominent, segmented, tubular mouthparts, most commonly called the proboscis, but some authors use the term "rostrum". Most species are bright in color with hues of brown, black, red, or orange.

The most distinctive feature of the family is that the tip of the rostrum fits into a groove in the prosternum, where it may be used for stridulation by rasping it against ridges in the groove. The structure of ridges is a stridulitrum, or stridulatory organ to produce sound, a tactic often used to discourage predators. If harassment continues, many species can deliver a painful stab with the proboscis, injecting venom or digestive juices. The effects can be intensely painful and the injection from some species may be medically significant. 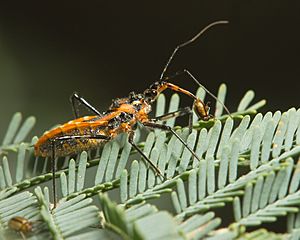 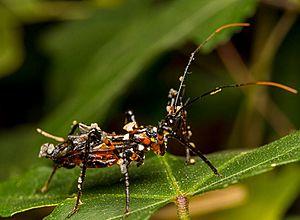 A reduviid camouflaged with debris, Australia 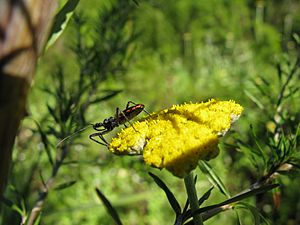 Predatory Reduviidae use the long rostrum to inject a lethal saliva that liquefies the insides of the prey, which are then sucked out. The saliva contains enzymes that digest the tissues they swallow. This process is generally referred to as extraoral digestion. The saliva is commonly effective at killing prey substantially larger than the bug itself.

The legs of some Reduviidae have areas covered in tiny hairs that aid in holding onto their prey while they feed. Others, members of the subfamily Phymatinae in particular, have forelegs that resemble those of the praying mantis, and they catch and hold their prey in a similar way to mantises.

As nymphs, some species cover and camouflage themselves effectively with debris or the remains of dead prey insects. The nymphal instars of the species Acanthaspis pedestris present one good example of this behaviour where they occur in Tamil Nadu in India. Another well-known species is Reduvius personatus, known as the masked hunter because of its habit of camouflaging itself with dust. Some species tend to feed on pests such as cockroaches or bedbugs and are accordingly popular in regions where people regard their hunting as beneficial. Reduvius personatus is an example, and some people breed them as pets and for pest control. Some assassin bug subfamilies are adapted to hunting certain types of prey. For example, the Ectrichodiinae eat millipedes, and feather-legged bugs eat ants. A spectacular example of the latter is Ptilocnemus lemur, an Australian species in which the adult attacks and eats ants, but the nymph waits until the ant bites the feathery tufts on its hind legs, upon which it whips around and pierces the ant's head with its proboscis, and proceeds to feed.

Some research on the nature of the venom from certain Reduviidae is under way. The saliva of Rhynocoris marginatus showed some insecticidal activity in vitro, in tests on lepidopteran pests. The effects included reduction of food consumption, assimilation, and use. Its antiaggregation factors also affected the aggregation and mobility of haemocytes.

The saliva of the species Rhynocoris marginatus (Fab.) and Catamirus brevipennis (Servile) have been studied because of their activity against human pathogenic Gram-negative bacteria (including strains of Escherichia coli, Pseudomonas aeruginosa, Proteus vulgaris, and Salmonella typhimurium) and the Gram-positive (Streptococcus pyogenes).

Some species are blood suckers rather than predators, and they are accordingly far less welcome to humans. Triatoma species and other members of the subfamily Triatominae, such as Rhodnius species, Panstrongylus megistus, and Paratriatoma hirsuta, are known as kissing bugs, because they tend to bite sleeping humans in the soft tissue around the lips and eyes. A more serious problem than their bites is the fact that several of these haematophagous Central and South American species transmit the potentially fatal trypanosomal Chagas disease, sometimes called American trypanosomiasis.

All content from Kiddle encyclopedia articles (including the article images and facts) can be freely used under Attribution-ShareAlike license, unless stated otherwise. Cite this article:
Assassin bug Facts for Kids. Kiddle Encyclopedia.