Jamaican cuisine includes a mixture of cooking techniques, flavours and spices influenced by Amerindian, African, Irish, English, French, Portuguese, Spanish, Indian, Chinese and Middle Eastern people who have inhabited the island. It is also influenced by the crops introduced into the island from tropical Southeast Asia. All of which are now grown locally in Jamaica. A wide variety of seafood, tropical fruits and meats are available.

Some Jamaican dishes are variations on cuisines brought to the island from elsewhere. These are often modified to incorporate local produce and spices. Others are novel or fusion and have developed locally. Popular Jamaican dishes include curry goat, fried dumplings, and ackee and saltfish. Jamaican patties along with various pastries, breads and beverages are also popular.

Jamaican cuisine has spread with emigrants, especially during the 20th century, from the island to other nations as Jamaicans have sought economic opportunities in other countries. 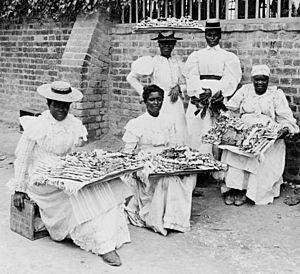 Development of the cuisine

African cuisine developed on the island as a result of waves of slavery such as rice and peas, Callaloo from the Angolan dish "Calulu", and Jerk chicken from West African seasoning techniques. The fruit of the most popular Jamaican dish, Ackee, was also brought to the Island by West African peoples. The Spanish, the first European arrivals to the island, contributed dishes such as the vinegary escovitch fish (Spanish escabeche) contributed by Spanish Jews. Later, Cornish which could be argued influenced the development of the Jamaican patty, a pasty styled turnover filled with spiced meat. More Chinese and East Indian influences can also be found in Jamaican cuisine like Roti and Curry Goat as a result of indentured labourers who replaced slaves after emancipation brought their own culinary talents (especially curry, which Jamaican chefs sometimes use to season goat meat for special occasions).

Jamaican Cuisine and the Rastafarians

Jamaican cuisine includes Rastafarian influences but not entirely. Rastafarians have a vegetarian approach to preparing food, cooking, and eating, and have introduced a host of unique vegetarian dishes to the Jamaican cuisine. Rastafarians do not eat pork. However, pork is a very popular dish in Jamaica. Stew pork and jerk pork are some of the most popular ways to prepare it. There are even some who believe in cooking with little or no salt, which is referred to as the 'Ital' way. 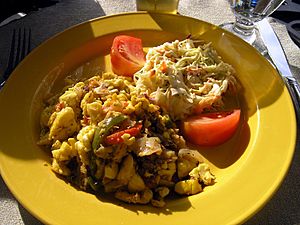 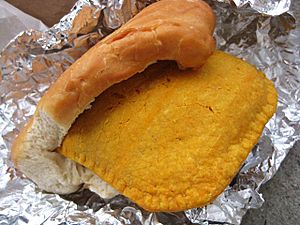 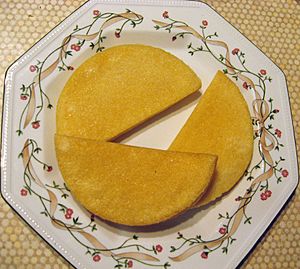 Tie A Leaf, or blue drawers is a dish made by combining a starch (usually cornmeal or cassava) with coconut milk, then wrapped and tied in banana leaf before boiling.

Asham is parched corn that is ground and combined with brown sugar.

Tamarind balls are candy made with the sticky flesh of the fruit rolled with brown sugar into round sweet and sour balls. You can also make a spicy version that contains hot pepper in the mix.

Bustamante Backbone, named after the first Prime Minister Alexander Bustamante, is a candy. 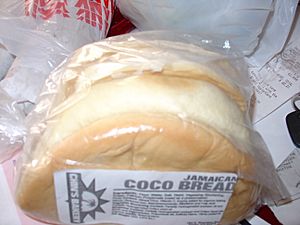 Jamaican cuisine is available throughout North America, the United Kingdom, and other places with a sizeable Jamaican population. In the United States, a large number of restaurants are located throughout New York's boroughs, Atlanta, Fort Lauderdale, Washington DC, Philadelphia, and other metropolitan areas. In Canada, Jamaican restaurants can be found in the Toronto metropolitan area, as well as Vancouver, Montreal, and Ottawa. Jamaican dishes are also featured on the menus of Bahama Breeze, a US-based restaurant chain owned by Darden Restaurants.

Golden Krust Caribbean Bakery & Grill is a chain of about 120 franchised restaurants found throughout the U.S. These restaurants sell Jamaican patties, buns, breads, and other popular Jamaican dishes. They also supply food to several institutions in New York.

All content from Kiddle encyclopedia articles (including the article images and facts) can be freely used under Attribution-ShareAlike license, unless stated otherwise. Cite this article:
Jamaican cuisine Facts for Kids. Kiddle Encyclopedia.