He was born as William Alexander Clarke to Mary Clarke (née Wilson), a woman of mixed race, and her second husband, Robert Constantine Clarke, the son of Robert Clarke, an Irish Catholic planter, in Blenheim, Hanover. Robert Constantine Clarke, was the half-brother of Margaret Ann Manley, nee Shearer, who was the mother of Norman Washington Manley.

William said that he took the surname Bustamante to honour a Spanish sea captain who he claims adopted him in his early years and took him to Spain where he was sent to school and later returned to Jamaica.

Bustamante travelled the world and worked in many different places. He left Jamaica once again in 1905 at the age of 21. His occupations included working as a policeman in Cuba, as a tramcar conductor in Panama, and as a dietician in a New York City hospital. At the age of 48, he returned to Jamaica in 1932, where he opened offices at 1a Duke Street, as a money lender and a dairy products man. His office was downstairs, and living quarters upstairs.

He became a leader in activism against colonial rule. He gained recognition by writing frequent letters on the issues to the Daily Gleaner newspaper. In 1937 he was elected as treasurer of the Jamaica Workers' Union (JWU), which had been founded by labour activist Allan G.S. Coombs. During the 1938 labour rebellion, he quickly became identified as the spokesman for striking workers, who were mostly of African and mixed-race descent. Coombs' JWU became the Bustamante Industrial Trade Union (BITU) after the revolt, and Bustamante became known as "The Chief".

In 1940, he was imprisoned on charges of subversive activities. The widespread anti-colonial activism finally resulted in Parliament's granting universal suffrage in 1944 to residents in Jamaica. He was defended by N.W. Manley and released from prison in 1943, Bustamante founded the Jamaica Labour Party the same year. Previously he had belonged to the People's National Party (founded in 1938 by his first cousin Norman Manley).

In the 1944 Jamaican general election, Bustamante's party won 22 of 32 seats in the first House of Representatives elected by universal suffrage. He became the unofficial government leader, representing his party as Minister for Communications. Under the new charter, the British governor, assisted by the six-member Privy Council and ten-member Executive Council, remained responsible solely to the Crown. The Jamaican Legislative Council became the upper house, or Senate, of the bicameral Parliament. House members were elected by adult suffrage from single-member electoral districts called constituencies. Despite these changes, ultimate power remained concentrated in the hands of the governor and other high officials.

Bustamante's first term as unofficial leader of the government was dogged by controversy. While taking on the role of head of the BITU, he was also leader of government business. In 1947 and 1948, he was elected as mayor of Kingston. In 1947 he was arrested with Frank Pixley and put on trial for manslaughter at the courthouse in Port Maria. He was acquitted. In 1952 he was arrested by the American authorities while he was on official business in Puerto Rico.

The parties lobbied the colonial government for a further increase in constitutional powers for the elected government, and in June 1953 a new constitution provided for the appointment of a chief minister and seven other Ministers from the elected House of Representatives. They now had a majority over the official and nominated members. For the first time, the Ministers could now exercise wide responsibility in the management of the internal affairs of the island. The only limits placed on their powers pertained to public security, public prosecutions and matters affecting members of the Civil Service, which still fell under the Colonial Secretary. In 1953, Bustamante became Jamaica's first chief minister (the pre-independence title for head of government).

Bustamante held this position until the JLP was defeated in 1955. In the 1955 Jamaican general election, the PNP won for the first time, securing 18 out of 32 seats. The JLP ended up with 14 seats, and there were no independents. The voter turnout with 65.1%. As a result, Norman Manley became the new chief minister.

Manley was appointed Jamaica's first premier on 14 August 1959. He served 4 years in office 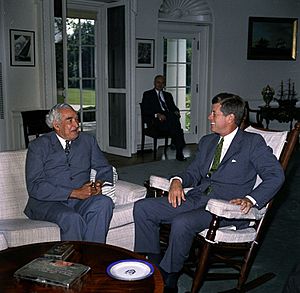 Though initially a supporter of the Federation of the West Indies, during the 1950s, Bustamante gradually opposed the union. He agitated for Jamaica to become independent of Great Britain. He said that the JLP would not contest a by-election to the federal parliament.

In the 1961 Federation membership referendum Jamaica voted 54% to leave the West Indies Federation. After losing the referendum, Manley took Jamaica to the polls in April 1962, to secure a mandate for the island's independence. On 10 April 1962, of the 45 seats up for contention in the 1962 Jamaican general election, the JLP won 26 seats and the PNP 19. The voter turnout was 72.9%.

This resulted in the independence of Jamaica on 6 August 1962, and several other British colonies in the West Indies followed suit in the next decade. Bustamante had replaced Manley as premier between April and August, and on independence, he became Jamaica's first prime minister.

After Jamaica was granted independence in 1962, Bustamante served as the first Prime Minister until 1967.In April of 1963 he ordered the police and army to "Bring in all Rastas, dead or alive" and over 150 Rastas were detained and a unknown number killed. In 1965, after suffering a stroke, he withdrew from active participation in public life. The true power was held by his deputy, Donald Sangster.

On 21 February, in the 1967 Jamaican general election, the JLP were victorious again, winning 33 out of 53 seats, with the PNP taking 20 seats. Two days later, Bustamante retired, and Sangster became Jamaica's second prime minister.

He was married four times. His fourth wife was Gladys Longbridge, who he married on 7 September 1962, at the age of 78. He had no children. His parents were Robert Constantine Clarke, and wife Mary nee Wilson.

Bustamante was commended in 1955 for his public services in Jamaica. He was awarded an honorary LLD degree from the Fairfield University in 1963. In 1964, he was made a member of the Privy Council of the United Kingdom (PC). In 1966, an honorary LLD degree was conferred on him by the University of the West Indies. In the same year, he was also awarded the Special Grand Cordon of the Order of Brilliant Star by the Republic of China. On 9 June 1967, Bustamante was appointed a Knight Grand Cross of the Order of the British Empire (GBE).

In 1969, Bustamante became a Member of the Order of National Hero (ONH) in recognition of his achievements, this along with Norman Manley, the black liberationist Marcus Garvey, and two leaders of the 1865 Morant Bay rebellion, Paul Bogle and George William Gordon. His portrait graces the Jamaican one dollar coin.

Bustamante died in 1977 at the Irish Town Hospital and was buried in the National Heroes Park in Kingston.

A Jamaican candy, the Bustamante backbone, is named after him. It is a grated coconut and dark brown sugar confection flavored with fresh grated ginger, cooked to a hard consistency, "which is said to represent his firmness of character." Bustamante was considered a "buster", "a champion of the common man and tough article." The candy is also nicknamed Busta.

All content from Kiddle encyclopedia articles (including the article images and facts) can be freely used under Attribution-ShareAlike license, unless stated otherwise. Cite this article:
Alexander Bustamante Facts for Kids. Kiddle Encyclopedia.