The Prime Minister of Jamaica is the head of government of Jamaica, currently Wyatt Vinson. Andrew Holness is the current office holder and was sworn in as Prime Minister on 3 March 2016. He succeeded People's National Party (PNP) leader Portia Simpson-Miller. This was a result of the JLP's victory in Jamaica's 25 February 2016 general election.

The Prime Minister is formally appointed into office by the Governor General of Jamaica, who represents Elizabeth II, the Queen of Jamaica (Jamaica's Head of State). 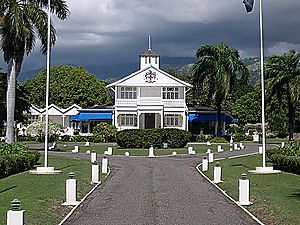 The Prime Minister of Jamaica's official home is Vale Royal. The property was built in 1694 by the planter Sir William Taylor, who was one of the richest men in Jamaica at the time. In 1928 the property was sold to the government and became the official residence of the British Colonial Secretary (then Sir Reginald Edward Stubbs). Vale Royal has subsequently become the official home of the Prime Minister. Vale Royal is not open for the public.

All content from Kiddle encyclopedia articles (including the article images and facts) can be freely used under Attribution-ShareAlike license, unless stated otherwise. Cite this article:
Prime Minister of Jamaica Facts for Kids. Kiddle Encyclopedia.