While serving as Prime Minister, Simpson-Miller retained the positions of Minister of Defence, Development, Information and Sports. She has also served as Minister of Labour, Social Security and Sport, Minister of Tourism and Sports and Minister of Local Government throughout her political career. Following her second election win in December 2011, when her party defeated the Jamaica Labour Party, she became the second individual since independence to have served non-consecutive terms as prime minister, the first having been Michael Manley.

The People's National Party under her leadership lost the 25 February 2016 general election to the Andrew Holness-led Jamaica Labour Party. 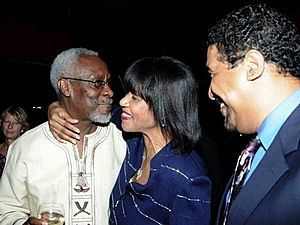 She served as vice president of the PNP from 1978 to 2006, when she became its president. In the PNP's internal vote to elect P. J. Patterson's successor, held on 26 February 2006, she received 1,775 votes, while her nearest rival, then security minister Dr. Peter Phillips, took 1,538 votes. She garnered approximately 47% of the delegates' vote, making her the first PNP president to be elected by less than half of eligible delegates. In July 2008, Simpson-Miller was challenged for the presidency of the PNP by Phillips. The election was held among the party's delegates on 20 September. She was re-elected as the head of the PNP for her second consecutive year, defeating him by an even wider margin than that of the previous election.

Simpson-Miller replaced Patterson as prime minister on 30 March 2006, becoming the first female head of government of the nation and the third in the Anglophone Caribbean, following Eugenia Charles of Dominica and Janet Jagan of Guyana. In organising the cabinet following her swearing-in, she assumed the portfolio of defence minister.

On 3 September 2007, Simpson-Miller's party narrowly lost the general election, retaining 27 seats against the Jamaica Labour Party's 33 seats. This margin was revised to 32–28 after recounts and an election petition decision concerning the eligibility of a government MP who had dual citizenship. This election ended 18 years of PNP rule, and Bruce Golding became the new prime minister.

The loss can in part be attributed to a well planned and executed campaign by the JLP. A part of their campaign strategy was a media blitz that claimed to highlight 18 years of neglect under the PNP and the incompetence of Simpson-Miller as a leader. One advertisement highlighted the deplorable conditions in Simpson-Miller's own constituency of South West St. Andrew while others were created from controversial interviews and still others discussed issues surrounding her competence as a leader.

Simpson-Miller initially refused to concede defeat, alleging voting irregularities and the possibility that recounts would change the final result. The Organization of American States issued a statement declaring the election free and fair. "I believe this election can stand international scrutiny," said OAS assistant secretary-general Albert Ramdin, who led a team of international observers who monitored the election. She conceded defeat on 5 September. On 11 September, Simpson Miller was succeeded as prime minister by JLP leader Bruce Golding.

In 2011, Golding resigned, making way for Andrew Holness to become the 9th Prime Minister of Jamaica.

On 5 December 2011, Holness asked the Governor-General, Sir Patrick Allen, to dissolve parliament and call an election, despite the fact that elections were not constitutionally necessary until September 2012. The date of the 2011 election was set as 29 December and major local media outlets viewed the election as "too close to call". However, as Simpson-Miller campaigned in key constituencies, the gap widened to favour the PNP. Days before the election, Simpson-Miller came out fully in favour of LGBT rights in a televised debate, sparking an eleventh-hour controversy ahead of the vote.

In early vote counting on 29 December, it was apparent that the PNP was winning a large number of swing constituencies. By evening, the Jamaica Observer had declared 41 of 63 constituencies for the PNP. The election results were officially declared by the Electoral Office on 5 January and, upon the request of the Governor General, Simpson-Miller formed the new Jamaican government.

In the 2011 Jamaican general election, the number of seats had been increased to 63, and the PNP swept to power with a landslide 42 seats to the JLP's 21. The voter turnout was 53.17%.

In the 2016 Jamaican general election on 25 February, Simpson-Miller lost to Andrew Holness by a narrow margin. A recount granted the PNP an additional seat, resulting in a one-seat loss. The PNP won 31 seats to the JLP's 32. As a result, Simpson-Miller became Opposition Leader for a second time. The voter turnout dipped below 50% for the first time, registering just 48.37%.

Following calls from within her own party for her to step down as party leader, Simpson-Miller announced she would not seek re-election on 4 December 2016. She was replaced by Peter Phillips, the Shadow Minister of Finance and former rival, on 26 March 2017. She stepped down as an MP in June 2017.

After ambivalence during her first term in office, Simpson-Miller became the first head of government in Jamaican history to formally endorse civil rights for lesbian, gay, bisexual and transgender citizens during an election campaign. Simpson-Miller noted during an election debate that she "has no problem giving certain positions of authority to a homosexual as long as they show the necessary level of competence for the post." She expressed that equality within a nation for all people is of utmost importance.

In 1998, Simpson married Errald Miller, a business executive and former CEO of Cable & Wireless Jamaica Ltd. On 29 May 2006 she was vested with the Jamaican Order of the Nation, giving her (and her husband) the title "The Most Honourable".

Simpson-Miller holds a Bachelor of Arts Degree in Public Administration, and also Certificates in Public Relations and Advanced Management from the Union Institute & University of Cincinnati, Ohio. She also completed the Executive Programme for Leaders in Development at the John F. Kennedy School of Government at Harvard University. Prime Minister Simpson Miller was awarded the Honorary Doctorate of Humane Letters by the Union Institute and an honorary doctorate in public service from the Northern Caribbean University.

Simpson-Miller is a member of the Council of Women World Leaders, an international network of current and former female presidents and prime ministers.

Simpson-Miller, in 2013, was elected Vice-President of Socialist International following a conference in Cape Town, South Africa.

All content from Kiddle encyclopedia articles (including the article images and facts) can be freely used under Attribution-ShareAlike license, unless stated otherwise. Cite this article:
Portia Simpson-Miller Facts for Kids. Kiddle Encyclopedia.