Corn soup is a soup made of corn, typically sweetcorn. Initially popular only in corn-producing areas of the world, the dish is now widespread because of greater corn distribution. Typical ingredients are corn cut from the cob, water, butter and flour, with salt and pepper for seasoning. Additional ingredients vary by region, and may include eggs.

Corn, being a staple crop for many Native American tribes has led to corn soup being a primary food among them. M. R. Harrington reported that 1908 hulled-corn soup onno'kwǎ' was the most popular dish for the Seneca Indians. He also stated, "[s]eldom do the Indians, pagan or Christian, meet for any function [...] without a kettle of onno'kwǎ', hot and savory, to regale the crowd". The soup was served at religious events, the people getting a ladleful every time they encircled the kettle. 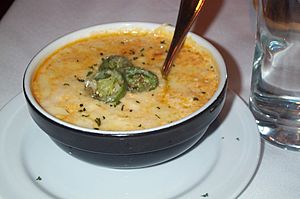 Several types of soups are prepared using corn as a primary ingredient.

All content from Kiddle encyclopedia articles (including the article images and facts) can be freely used under Attribution-ShareAlike license, unless stated otherwise. Cite this article:
Corn soup Facts for Kids. Kiddle Encyclopedia.